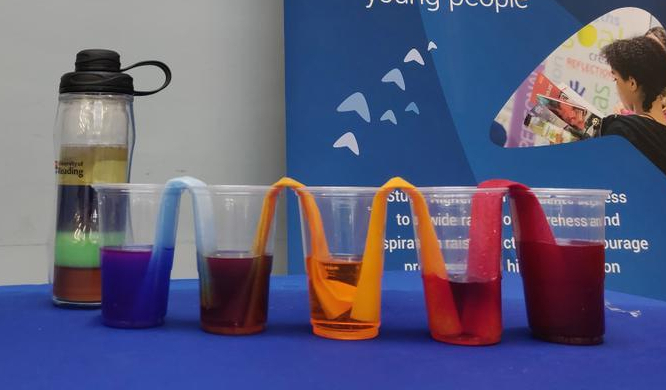 There are a lot of examples of this experiment out there on the internet, so I’m not claiming that this was my idea but, when I tried this out for the first time I was really surprised at how good it ended up looking for the amount of effort I had to put in.

All you’re going to need are some cups, some food colouring, some water and some tissue, paper towel or filter paper.

This all works because of the water being pulled up through the absorbent material. The more absorbent the material you choose, the faster the empty cups will be filled.

So what makes a material absorbent? It all depends on the fact that water molecules and air molecules do not get along at all. This leads to the kinds of effects we’ve seen in other experiments like the Floating Paperclips. Materials like paper are made up of loads of tiny fibres smashed together – so there are a lot of gaps in between those fibres. Water can get into those gaps and effectively, hide away from the air molecules they hate so much. The material that makes up those fibres – cellulose – is hydrophilic. This means that it likes water, so inside the gaps between the cellulose fibres, not only are the water molecules able to avoid the air, they also interact with atoms in the cellulose molecules that like water too. This, all round, makes for some pretty ‘happy’ water molecules. There are plenty of materials that can absorb water well, such as cotton or the fantastically named upsalite which all rely on having lots of tiny gaps for ‘happy’ water.

How can you take this further?

Usually, I would challenge you to find a way to break the experiment and stop it happening. The problem is that capillary action is something that you might struggle to stop!

You can use different materials – the more absorbent the better (more tiny gaps in the material for the water to get into), or different thicknesses – fold several layers of tissue together and see whether that pulls more water through than a single layer.

You could even try to mix two different colours of food colouring in the full cups and see whether one colour gets pulled through the paper faster than another. This might work best with food colouring mixed with something that struggles to dissolve in water quite as well like ink or an oil-based paint.

There are a lot of applications for materials that can absorb water well – think of high-end sports tops that can wick away sweat or how you might try to fix a phone after dropping it into your cereal.

Besides that, plants rely on capillary action to get water from the ground up to the tops of their leaves. This is a much more colourful way to see this happening – and it’s also a bit quicker than growing a plant to help with revision.