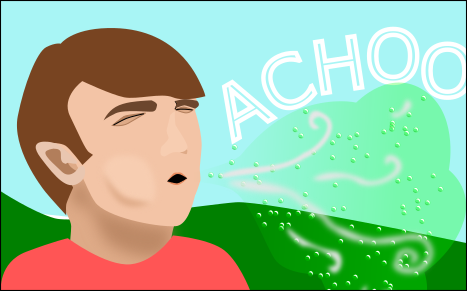 Molecule of the Month – August ’19

­Sunshine, hot weather and holidays, summer time brings them all. For many the summer is the best time of the year and yet for one in five people the warm, humid weather can bring misery. This is because they suffer from a type of allergic rhinitis commonly known as hay-fever! What can you do about it? Well, if you’ve got hay fever, cetirizine might just be your best friend!

If you have ever suffered from hay fever, you will know how much it affects your daily life: runny nose, itchy red eyes, sneezing and coughing. Worse still is these symptoms can last for six months. Luckily, there are drugs available to help prevent and relieve these symptoms. One that is commonly prescribed is a drug called cetirizine.

You don’t need to be a scientist to know that hay-fever is an allergic reaction to pollen from grass, trees and flowers.  In our bodies, when an allergic reaction occurs a small molecule called histamine is released.  The histamine then binds (attaches) itself to a specific protein called an H1-receptor[1] . Our bodies respond to this by producing the symptoms typical of hay-fever.

Cetirizine works by binding to the H1-receptor instead of histamine. This blocks the place where the histamine wants to go and prevents it from attaching to the protein. The technical term for this is an H1-receptor antagonist. Its ability to stop histamine from working is why cetirizine, and other similar types of medicine, are known as anti-histamines.

Cetirizine is also a second generation anti-histamine, a newer set of drugs that are much more picky to which H1 receptor it binds to. This helps to reduce side effects – unwanted symptoms caused by the medicine itself.  The conditions inside our bodies also change the molecule slightly causing only a small amount of it to reach our brains. This stops it making us feel sleepy, it is non-sedatory, which means you can no longer fall asleep in class and blame your hay-fever medicine!

Another important property of cetirizine is how fast it works. Within 20 minutes of taking the drug, the effects can be seen and will last for nearly a whole day. People suffering from hay-fever can therefore take the medicine first thing in the morning and know it will last until night time.

Many drugs have a horrible, bitter taste. There has therefore been much research to hide its taste by mixing it with other molecules that not only improve its flavour, but also help to release it in our bodies. One idea was to create chewing gum containing cetirizine.

Our friend cetirizine’s structure is shown in the image below. Just like many drugs, cetirizine is a shorter, easier name for the molecule. If you used the official chemistry way of naming molecules, its full name would be: [2-(2-{4-[(4-chlorophenyl)(phenyl)methyl]piperazin-1-yl}ethoxy) acetic acid]. Surely, you can see why this name did not catch on!

Its structure also contains a hidden, but very important property: one that scientists and pharmaceutical companies must be aware of and ensure is properly studied. Whilst this may sound like a dark, mysterious, spooky concept, it is nothing more than simple reflection… its own mirror image!

We can see this for ourselves without having to reach into a mirror. Hold out your hands in front of you, with your palms facing down, and you will see that your right hand is a mirror image of your left hand.  The crucial bit, however, is what happens when you overlap your hands. If you put your hands on top of each other, so both palms are still facing down, you will notice a problem – your hands do not overlap completely. The main part of your hand and your four fingers are fine, your thumbs however do not overlap.  If you were to remove your thumbs (not recommended), then your hands would overlap each other.

If two things can be overlapped and still look the same, we say they can be superimposed.  We can apply this same concept to molecules. Molecules whose mirror images cannot be superimposed (overlapped) on itself are said to be chiral (pronounced Ki-ral). Chirality occurs throughout chemistry, however we have no need to go into any more detail except to ask: Why is this important to molecules and how does it affect cetirizine?

In chemistry, two molecules that are mirror images of each other and cannot be superimposed are called enantiomers. The extraordinary outcome is that despite being the exact same molecule, two enantiomers can have different effects in our body. This is important when creating molecules for use as drugs. Sometimes one enantiomer may work whilst the other does not. One may be beneficial to our health, whilst the other may be toxic and harm us.

Cetirizine is a chiral molecule, looking at the structure in the image above, shows the mirror image of the molecule. If we were to rotate the molecule on the right so that the green ball was in the same place as the molecule on the left, we would quickly see a problem. Even though the green ball and the ring structure to which it’s attached are in the same place for both molecules, the rest of the structure does not match. Therefore, these two versions cannot be superimposed. The molecule on the right is called levo-cetirizine. Luckily, in this case both molecules work to help stop hay-fever symptoms, although levo-citirizine is slightly better.

Not to be sniffed at…

During those hot summer months, many will only know of cetirizine as an anti-histamine designed to relieve the symptoms of hay-fever.  So next time someone you know is hiding inside from the plants, hoping to avoid sneezing and itching, let them know about cetirizine’s shady life. Tell them about its day job as a molecular bouncer, stopping histamine from getting to its destination, and its mysterious mirror-image twin, so similar and yet so different. So this is one tale not to be sniffed at…

[1] There exist other histamine receptors throughout our body. Each one is like a giant 3D jigsaw puzzle with a piece missing. This missing piece is the same shape as a histamine molecule. When histamine attaches itself, the puzzle becomes complete, sending signals to the rest of our body causing it to react in some way. So far, four different histamine receptors have been identified: H1, H2, H3 and H4. The majority of drugs target only the H1 receptor. BACK TO POST

Marcus has a Ph.D. in Theoretical Chemistry from the University of Birmingham studying the photo-chemistry of aromatic molecules and the green fluorescent protein.