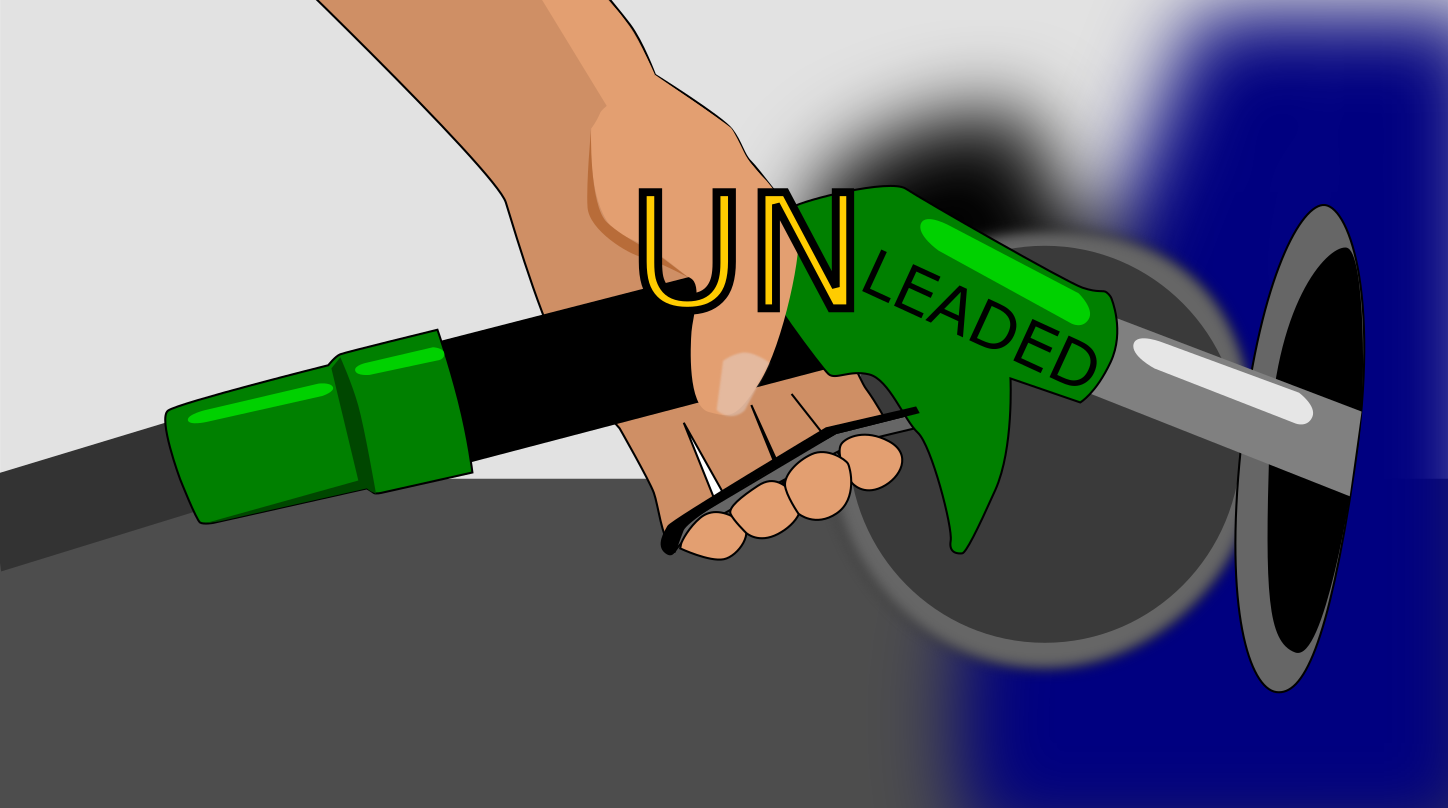 Have you ever wondered why petrol is called unleaded? After all, you never see leaded petrol on sale. Phil takes to the stage to tell a tale filled with science superheroes and lead poisoning. So let’s find out all about it with some Heroes, Villains and Happily Ever Afters.

If you’ve been to a petrol station, you will have noticed two different types of fuel: diesel and unleaded petrol. It turns out this story contains a few science superheroes and a whole lot of lead poisoning.

The truth is, however, that petrol used to have lead in it. In fact for many, many years the only petrol available contained lead. The source of lead came from the molecule tetraethyl lead (TEL for short) added to petrol to improve its quality. The story and science behind this most infamous and controversial of molecules is one worth TEL-ling.

Tetraethyl lead is a small molecule with a very simple structure. It consists of a single lead atom attached to four short chains made of carbon and hydrogen. We cann these carbon chains ethyl groups (C2H5)[1] . As for its appearance, it is a colourless liquid, described as having a sweet odour.

It’s got a fancy name, what does it do?

It was during the Victorian age that two scientists claimed to have made TEL. The first discovery, made in 1853/4, is usually given to the German chemist Karl Jacob Löwig. Despite the discovery, little attention was given to TEL and it found no use throughout the rest of the 19th and early 20th Century. This is how TEL could and perhaps should have remained, nothing more than a boring molecule used occasionally in research labs.

This all changed in the 1920s when Thomas Midgeley Jr, a chemist working for General Motors, realised that adding TEL into petrol improved its octane rating and reduced the amount of knocking. Why was this good?

Normally in an engine the fuel / air mixture is ignited by a device called a spark plug. In addition, a pushable cylinder called a piston presses against the fuel / air mixture. This increases the pressure, causing the temperature to rise, and can result in the fuel igniting when it shouldn’t. This problem known as pre-ignition. Furthermore, the early ignition of fuel leads to a series of noises coming from the engine – known as knocking.

The octane rating of a fuel describes its performance and how good it is at preventing knocking. The higher the octane number, the more pressing from the piston the fuel can take without pre-igniting.[2]

All that glitters is not gold…

This was the appeal of TEL, a cheap, efficient molecule that improved fuel’s octane rating. Before you rush to drop lumps of lead into your petrol, be warned, toxic lead severely damages the environment and your health!

TEL itself is an unpleasant molecule, but things only get worse in a car engine. The attachment (bond) between the lead and carbon atoms is weak and so when exposed to the hot temperatures inside an engine begins to fall apart – we call this decomposition. The decomposition of TEL, with some help from oxygen, produces carbon dioxide, water and lead, which can react further to produce lead oxide (PbO). From a car makers point of view, lead and lead oxide are not good and can ruin the engine. To deal with this, another molecule specifically designed to soak up lead and its oxide is added to the fuel. This produces lead chloride (PbCl2) and lead bromide (PbBr2), which are then finally released from the car in exhaust fumes.

It makes people angry, violent and it hinders the development of intelligence in children! The real problem is that they found the perfect distribution tool for a chemical weapon – millions of hot exhaust pipes belching out gases on every road up, down and around the world. Before long, traces of lead were being found in food, drink, soil and air. It was clear that lead, mainly from car exhausts, was damaging the environment and affecting human health. Something needed to be done!

Cars used to spew out even worse chemicals than they do now, including lead salts! This can lead to lead poisoning.

It can also reduce intelligence and lead to increases in violent crime!

To take on the foe of lead poisoning and all the corporate backing it had, we needed superheroes of science.

The greatest tragedy is that the hazards of TEL and lead compounds were known about long ago. Long before its inclusion in fuel. Early in the 1920s, Alice Hamilton had studied the effects of lead in the body and confirmed its poisonous nature. Alice Hamilton (1869 – 1970) was an American researcher, medical investigator and Public Health official. She was shocked at the idea of putting lead in petrol and warned the public against the health risks, stating the risks were much greater than the benefits. Even with her vocal opposition, officials were convinced by the motor industry that the amount of lead being released from cars posed no harm.

It wasn’t until the late 1960s that Derek Bryce-Smith (1926 – 2011), an academic at the University of Reading, lead a renewed campaign against the use of TEL and highlighted its dangers. His research showed that lead pollution was reducing the IQ (intelligence) of children. To begin with, these concerns were ignored by the motor industry. However, upon going public with his research-based concerns, the intense public pressure eventually resulted in the creation of unleaded petrol and the slow decline of TEL.

How about a happily ever after?

Our science superheroes eventually won their battle with lead poisoning. The overwhelming evidence for the damage TEL was causing finally lead to action. In the US in the 1970s, the newly-formed Environment Protection Agency (EPA) began taking action to phase out leaded petrol. The Clean Air Act of 1996, formally and finally banned completely the use of leaded fuel in any on-road vehicle. In the UK, leaded petrol was totally banned in 2000, as well as throughout the European Union. In fact, by 2011 the majority of countries across the world had banned and removed leaded petrol. Recent studies from different parts of the world have shown the amount of lead in people’s (especially children’s) blood to have dropped significantly since such bans were put into force.

The campaign for cleaner emissions from cars meant that the newly invented catalytic converters were in demand. The evidence that they were unable to work with leaded petrol only contributed more to TEL’s decline.

Despite efforts around the world to remove leaded petrol, there are still countries using it within the last five years. These countries are however in the process of phasing leaded petrol out. So does this mean a total worldwide ban is nearly complete and the use of TEL is finally over? Unfortunately not!

Whilst the focus on TEL has been on leaded petrol for road vehicles, it is still used in aircraft fuel. More controversially, was the revelation that a British company still making and exporting TEL to several countries around the world.

We’re not out of the woods yet though…

Tetraethyl lead demonstrates the delicate balance between the benefits and risks that molecules can present. Even today, new products are constantly being assessed, with critics pointing to potential harmful impacts whilst manufacturers strive to assure the public all is safe. The problems of molecules such as TEL also result in a negative public view regarding chemistry and a view that we are constantly and carelessly damaging the world. The research and public campaigning by scientists such as Alice Hamilton and Derek Bryce-White show there are those determined to ensure science helps us, but not at the risk of our health or environment. Luckily, the ban and removal of TEL from cars has helped reduce levels and improve health, although higher concentrations do still remain in places.

Some molecules will never change their behaviour and lead compounds will always be toxic and harmful. Since the demise of TEL, a variety of new chemicals have been created and tested to improve the octane rating of petrol and make it a better anti-knocking agent. Even without lead, the role of petrol and the emissions from car exhausts is still under much debate. Moving forward, the ultimate aim is the invention of fuel or vehicles that no longer requires petrol as we know it, and instead of emitting harmful carbon and nitrogen oxides produces only water. Our science superheroes of the past fought and won against lead poisoning but who will the next set of superheroes be? And what will they have to fight against? Will we get there before the damage becomes too great? Only time will TEL.

[1] An ethyl group (C2H5) is made up of two carbons atoms attached to each other. One of the carbon atoms is also attached to three hydrogens, whilst the other carbon only has two attached to it. The carbon atom attached to only two hydrogens has a gap (since carbon can have four attachments or bonds) that allows it to attach to another atom. In the case of TEL this atom is lead. It could, however, be another carbon atom, a hydrogen (to make ethane) or many other different atoms. BACK TO POST

Marcus has a Ph.D. in Theoretical Chemistry from the University of Birmingham studying the photo-chemistry of aromatic molecules and the green fluorescent protein.