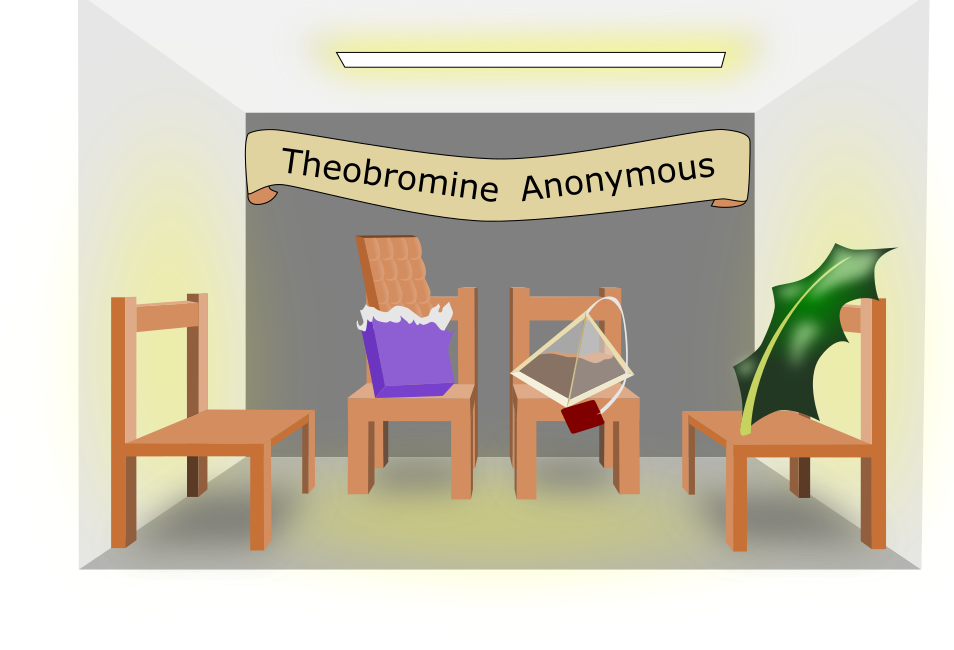 October’s Molecule of the Month

When you say “trick or treat”, are you hoping to get theobromine? Maybe! I know it sounds bonkers but go with me here, I promise it’s not a trick – theobromine really is a treat! So what is it?

Names are very important in science, whether for physical objects, processes, mathematical formulae or theories. Universally accepted names help scientists across the world to talk to each other and know exactly what they are each referring to. Unfortunately, names are sometimes misleading and have nothing in common with what their name suggests. For example, people still often refer to tin foil even though it is now made from aluminium. Bombay duck is actually a fish and guinea pigs are neither pigs or from Guinea. The hundred years war lasted 118 years and, despite Han Solo’s claim, a parsec is a measurement of distance, not time! Flammable and inflammable mean the same thing and let’s not even get started on what is strictly a fruit, a nut or a berry![1] There’s even an entire wikipedia page for chemicals with unusual names!

You would therefore be forgiven for thinking that this month’s molecule, theobromine, would contain a least one atom of bromine somewhere in its structure. The rather dull surprise (spoiler alert!) is that this molecule contains absolutely no bromine at all. So is this another cruel, misleading joke? This time, we can make some valid excuses, as the name theobromine comes from Theobroma, the name for a group of trees known as the cocao tree.

Despite all the misleading names so far, the similarity you are all making between cocao, cocoa and chocolate is more reasonable. The seeds extracted from the species Theobroma cocao are used to make cocoa and eventually chocolate, and it is in cocoa and chocolate that you are most likely to find theobromine.

Theobromine was first discovered in cocoa beans by the Russian Alexander Woskresenky in 1841. Chemically, theobromine is very similar to caffeine, with the only difference in structure being the presence of a methyl (CH3) group in caffeine. Both belong to a family of molecules called alkaloids. These are naturally occurring molecules (commonly from plants) that contain a basic nitrogen[2]. The structure of theobromine, as seen below, is formed from two connected rings of carbon and nitrogen: one six-sided, the other five-sided. The larger ring is also bonded to oxygen in two separate places.

What does theobromine do?

The effects of theobromine can be similar to caffeine – what a treat – although the trick is its much weaker (around ten times less). It is believed that theobromine is one of the molecules responsible for the good feeling we get from eating chocolate as a treat and our subsequent love for (forgetting the tricks it plays on our teeth or weight!). In our bodies, caffeine and theobromine stop a molecule called adenosine from attaching to receptors in our brain. This stops us from slowing down and is why a cup of coffee often stimulates us and helps make us feel more alert. However, out of the two molecules, caffeine can reach our brains much easier and affect our central nervous system.

Whilst it does not provide the same buzz as caffeine, theobromine does affect our bodies and could possibly by used in medicine. For one thing, it is a heart stimulant, which helps to increase heart rate, as well as helping to relax muscles in our lungs, making it useful as a treatment for asthma and to help us cough less. It is also a known vasodilator (widens blood vessels) and a diuretic, which makes us need to urinate. Despite the known benefits theobromine can have on our health, there are currently no drugs or medicine available for use. There is, however, much research into using theobromine and taking advantage of its effects on our body.

In its pure form, theobromine is a white, bitter tasting molecule: this bitterness that is responsible for the taste of dark (plain) chocolate, which to some people is a mean trick and to others is a treat! Dark chocolate contains a higher percentage of the molecule (around 210 mg per 50 g) compared with milk chocolate (around 70 mg per 50 g).

You are most likely to find theobromine in chocolate and related items of food. Essentially, if it contains chocolate or cocoa powder, it will contain some varying amount of the molecule.  Away from chocolate, small amounts of theobromine can also be found in tea (around 0.2 %) and in kola nuts[3] Holly and several related species also contain theobromine, although you are unlikely to eat these; not only are they prickly, but also rather poisonous!

In fact, even without eating chocolate, a small amount of theobromine is produced in your body as a product from the digestion of caffeine. The half-life (the time is takes for the amount of a substance to halve) of theobromine in our bodies is 6 – 10 hours, which is slower than caffeine but still quick enough to avoid any problems.

The metabolism (chemical reactions that break down substances we take into our body) of theobromine is what makes chocolate so dangerous to pets, particularly dogs. The slow rate at which theobromine is metabolised in dogs means that toxic levels of the molecule can quickly build up, ultimately resulting in poisoning. This can cause hyper-activity, vomiting, diarrhoea, irregular and fast heartbeats (known as arrhythmia and tachycardia), seizures and possibly even death. This makes death by chocolate a very, real thing.

Whilst theobromine is naturally found in the previously mentioned foods, chemists have constructed their own pathway to create it. They do this by starting with a molecule called xanthine that is very similar to theobromine. Some clever chemical reactions replace several of the hydrogens with methyl groups (CH3) to give theobromine. Further reactions can then be used to produce caffeine. Plants, such as the cocao tree, use a similar pathway to create theobromine. However, this process (known as bio-synthesis), firstly involves making the xanthine molecule. Here, the starting molecule is known as AMP[4] and involves many more steps to reach xanthine, before finally becoming theobromine.

What’s in a name? Well for theobromine the answer certainly is not any bromine. Aside from its misleading name, theobromine seems full of tricks: bitter tasting, yet found in nearly everyone’s favourite treat food; chemically similar to caffeine, but instead of giving us a buzz makes us feel more relaxed and pleasant. Wherever there is chocolate, there is theobromine, a molecule that is present from the seeds hanging on the tree, all the way through to your favourite bar, drink or dessert. The future of theobromine holds much promise, especially in the creation of new drugs. You may find that one day you are being prescribed not a packet of tablets, but a bar of chocolate!

Wishful thinking, but we can all dream.

Just don’t give any to the dog…

[1] Guinea Pigs are actually rodents found in South America (such as in Peru). The whole parsec debate in the Star Wars Universe has lingered ever since the film was released. It may possibly have been resolved in the latest Han Solo film. Something that doesn’t catch fire is non-flammable. Some scientists will point out a technical difference between flammable and inflammable, but in general both terms relate to substances that can be set fire to or burst into flames. Deciding what is a fruit, a nut or a berry is a very tricky and controversial area, with some people very picky, and sometimes angry, at getting the definitions exact. BACK TO POST

[2] We are all familiar with acids and bases, but there are several different ways we can define them. One approach (known as Bronsted-Lowry theory) is to say acids donate protons (written as H+ and are hydrogen atoms with no electrons) and bases accept protons. In this sense, a basic nitrogen is one that will likely and easily form an attachment (bond) to a proton. BACK TO POST

[3] Kola nuts come, unsurprisingly, from the kola tree that is native to Africa. These nuts give their name to the Cola in Coca-Cola, and indeed the original recipe for the fizzy drink used kola nuts. BACK TO POST

[4] AMP stands for adenosine monophosphate. AMP is used in the construction of RNA, as well as ATP, which is important for storing and releasing energy. BACK TO POST