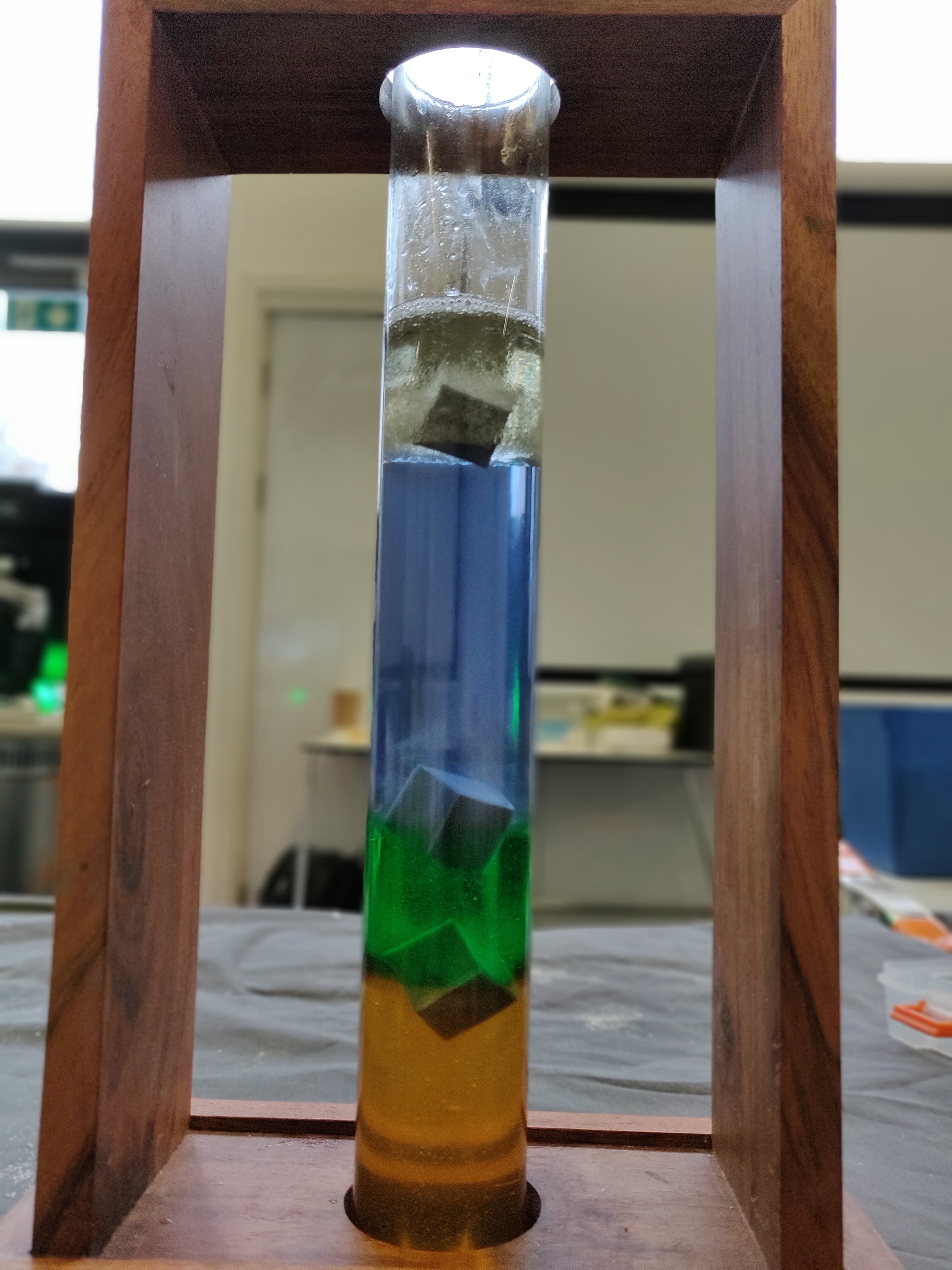 This is a demo I love to do in public because it is pretty much bulletproof. It’s easy to learn, easy to set up, it’s just a shame that it is a nightmare to wash up afterwards. There are ways you can get more layers than this version and I’ll add some links to other resources at the bottom but we’ll keep things simple for now. Let’s crack on and learn how to make a density tower!

View the rest of #XPeriMas here.

Here’s a video of me making a density tower live in front of an audience so you can see how to do it. This was filmed at the University of Warwick’s Family Day on 1st December 2019.

Pour the honey into a tall, thin container. Something like a measuring cylinder if you’ve got one, but a bottle would work just as well. The wider the container is the more of the liquids we will need to use so it’s best to go small to keep the costs down!

Next, pour the washing-up liquid onto the top of the honey layer. These shouldn’t really mix at all so you don’t need to be too careful yet.

Back to being careless – pour the vegetable oil onto the water layer.

Oops – I’ve left something out! I said you would need food colouring and we have forgotten to add it… What do you think will happen if you add a few drops of food colour now that the oil is on the top? Will the oil change colour? Try it out and see.

The liquids will all mix if you give the cylinder a really good shake. Honey and water mix well together. Washing-up liquid is a type of soap that helps oil dissolve into water. The reason they aren’t mixing now is density – or how much stuff is crammed into one space. If we take some water and dissolve salt in it, the container now weighs as much as the water and the salt but the volume (size, or amount of liquid) won’t have changed all that much. There is more stuff crammed into the same volume – it is now more dense. Dense stuff feels the pull of gravity more strongly and so is pulled downwards.

If we organise the liquids with the most dense – honey – at the bottom and the least dense – oil – at the top then the amount of downwards force on the layer below will be greater than that on the layer above. For example, the washing-up liquid is being pulled down but not enough for it to be pulled into the honey because the honey is being pulled downwards much more!

Solids have density too. Think of a piece of metal the same size as an orange – which one would be easiest to pick up? A more dense solid will be pulled downwards more strongly – so if the density of the solid is greater than the density of the liquid that you put it in then it will sink! Find some solid objects around your house and drop them into your cylinder – can you guess which layer they will stop at?

I’ve used a 3D printer to make cubes with exactly the density I want them to have so that they will sit in between the different layers but you can try things like coins, beads, pasta, paper, foil, plastic – anything really!

Try it out and send in your pictures via Twitter using #XPeriMas!

View the rest of #XPeriMas here.