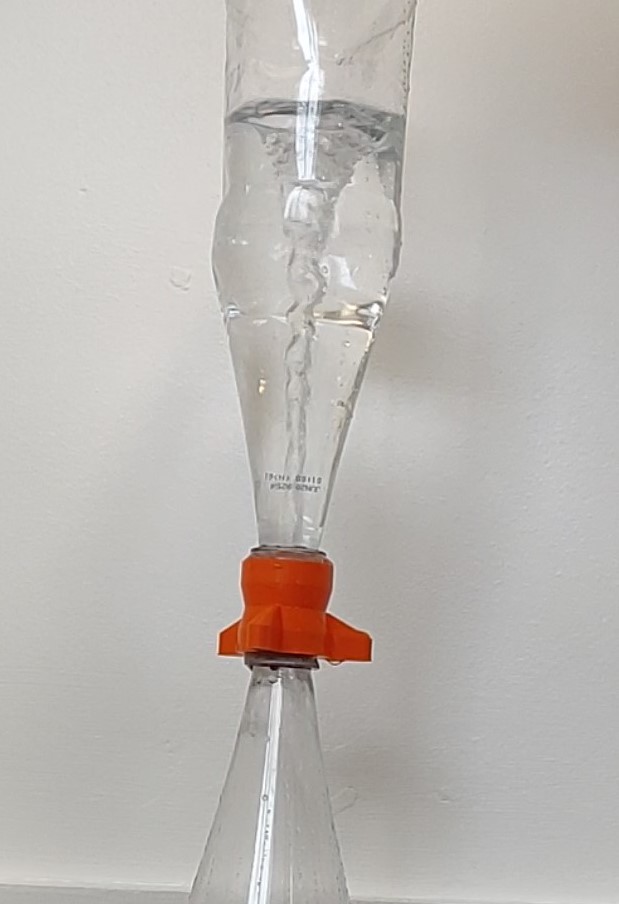 Here’s another video from my show on 1st December – this time it’s about how to make a whirlpool when you empty a bottle of water! You can use this trick to always win a ‘I bet you I can empty this bottle faster than you can!’ race – so long as they don’t squeeze the bottle.

What is the trick?

Pouring liquid out of a bottle isn’t as simple as tipping it all out of a bucket. The water might start to pour out at first but sooner or later a big air bubble will try and get into the bottle and make the liquid you’re pouring jump and bump and make a mess.

What looks like an empty bottle actually isn’t empty – it’s full of air. We can’t see air and we can only feel it if we move really quickly or the wind is blowing but it is definitely there and it definitely gets in the way of things trying to move! Anyone who was been on a roller coaster that is going really fast will know the feeling of the wind rushing and pushing past you. You are trying to get past the air and the air is trying to get past you and it is a big battle! You carry on in the direction you were going though and push the air out of the way – you win the fight (well done!) – the air goes around you to the sides.

Pouring from a bottle, though, going around the sides isn’t an option. There is a small opening to go through and the water is trying to get out while the air is trying to move past it and get into the bottle. The two will get in each other’s way and battle it out. One second the water will win and pour out and the next the air will win and a big bubble will form and blob its way up into the bottle.

Why is the air so determined to get into the bottle?

When we have emptied the bottle of water, it will be full of air. The air gets in everywhere and fills up all the gaps that are left behind. Air – all gases really – love to be as spread out as possible and don’t like to be anywhere near any other gas molecules. As they spread out the molecules try and get into any containers and take up that room.

As the water pours out it leaves a gap behind it. The space that was being taken up by that water is now totally empty – and the air wants to get into that space to make sure that it isn’t empty. This is all about pressure. Pressure is always pushing from where there is lots of stuff to where there is a big space for that stuff to go! Think of an entire room full of people all being crammed up in one corner of the room – no one is comfortable, everyone has to sit on someone else’s lap – and then telling those people they can spread out and use up the whole room. Everyone now gets their own seat and space at the table and room to breathe. The people will spread out quickly, won’t they? Gas molecules, even though they are so tiny, do the same thing and spread out to take up that room. An empty bit of space is a tempting thing for gas molecules and they will really fight to get there – the pressure that is trying to get them there is really strong. So as the water bottle empties and leaves an empty space, the pressure to get air into that empty space builds up.

So if we want to pour the liquid out without having these air molecules get in the way and those big air bubbles slowing things down and going blub blub blub all the time, we need to stop this pressure building up and to do that we need to get air into that empty space really quickly. We will use a little trick to help the water and air move past each other smoothly.

I’ve used a 3D printer to make the connector between the two bottles here and I’m happy to share the design file for it if you have a printer you can access at a school or in a library.

It is possible to make your own version of this without a 3D printer – it involves using the bottle caps from the original bottles and gluing them together. Then you can drill a hole through the glued-together caps for the water to run through. You’ll need about a 12 mm hole for this to really work out. You will also probably need to use some duct tape to keep the whole thing together because even super glue isn’t strong enough to hold a 2 L bottle of water from tipping over and snapping the glue-seal between the bottle caps.

How to do the trick

It’s simple really – turn the bottle over so that it starts pouring out. As soon as you’ve got it upside down, start to rotate the top around in circles so that all the water inside the bottle is spinning around and around the bottle. Soon enough the air bubbles that are blub-blub-blubing all the way up the bottle will start to come together in the middle of the bottle and connect up. Once they do, we have a big tube of water all the way up the middle of the bottle. The water is going around the outside and the air is going up the middle. The air can get to the top of the bottle where the empty space is, the pressure doesn’t build up and the water pours out smoothly without any of those big bubbles forming.

Can we make the tornado look even cooler?

First we need to think about what it is we can see when we look at that tornado – we are seeing the surface of the water pouring around the outside of the bottle meeting the air in the middle. If you wanted to see a water surface more easily, what can you try?

You can add a few drops of food colouring and this can help to make the whole thing easier to see. Don’t add too much though – if you make the colour dark then the light won’t get through and the watery surface will be much harder to see! We need light to shine through to see this.

It’s easy to see the bubbles in a bubble bath isn’t it? We can add a tiny bit of soap to the water and this will form just a little bit of cloudiness on the water surface to help you see the tornado. I said tiny and I really mean absolutely-almost-nothing-at-all amounts of soap – maybe one drop of washing-up liquid in a 2 L bottle and no more! If you use too much all you’ll do is fill the bottles up with foamy bubble bath mixture and you won’t see anything any way.

Can’t I just squeeze the bottle?

Well, yes. That does also empty the bottle really quickly but the reason that speeds up the water pouring out is the same thing, really. It’s about pressure again. You are putting pressure on the bottle, squeezing the water out. You make the bottle smaller by squashing it and that takes away the empty space that would have formed so there wouldn’t be anywhere for the air molecules to go so there isn’t a pressure forming to push an air bubble up into the bottle and get in the way of the liquid coming out. So yes, you could empty the bottle faster by squeezing it but you wouldn’t make an awesome tornado, then, would you?

Can I do this without a fancy bottle-connector?

Yes – you can do it with just one bottle. The reason I use the connector is that I can re-use the water over and over again and save on the water bill by catching it in the other bottle. If I want to do the trick again I just turn the bottles over again and voila! You can just turn a bottle upside down and spin it around until you start a tornado and hold it over the sink or a bucket if you want to – it will do the same thing.

If you try this at home please do share pictures and videos of your creations on twitter with #XPeriMas! I want to see them!