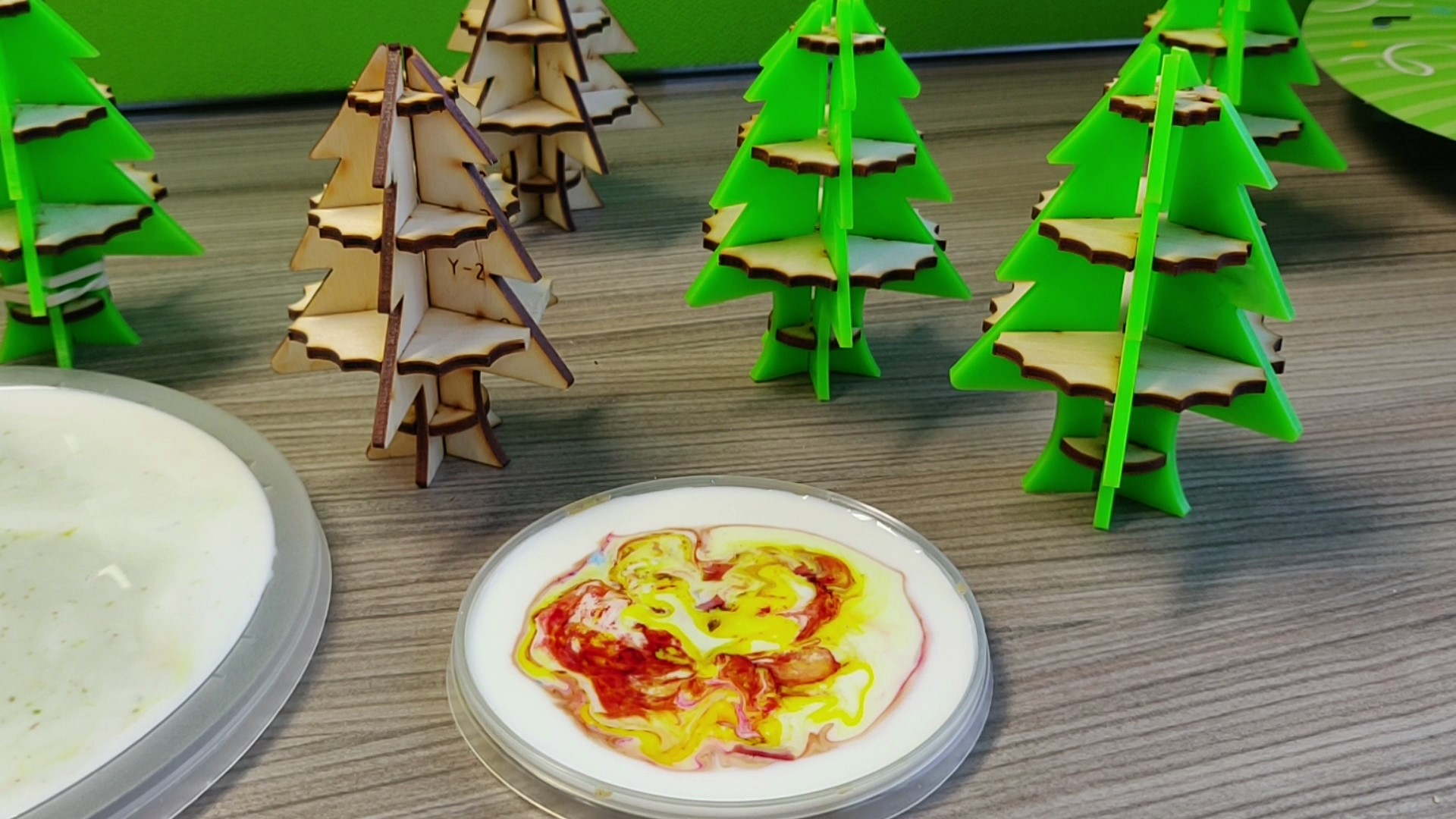 This is often known as tie-dyed milk because it will end up looking like we have dyed the surface of the milk with some beautiful colours! We will see colours run away repelled by a drop of soap. This is how to make your very own explosion of colour.

Ingredients for an explosion of colour

How to make an explosion of colour

Try and make sure that the tray you are using is as clean as possible before you start – especially that there are no suds or soap left on it. This will help make the results look better!

Pour milk into the container – it doesn’t need to be a deep layer of milk but it does need to cover the bottom of the container entirely.

Gently drip food colouring into a pattern on the surface. I tend to go near the middle but not exactly in the middle – this helps you to keep your different colours separate from each other. If you drip them on top of each other they will all just mix up.

…and watch the colours explode across the surface of the milk.

Some food colourings stay put in small droplets and some really spread out on the surface on their own. You want to use ones that stay put for this, really. In my colours, yellow tended to spread out a lot.

I ended up with some of my prettiest results just from using the yellow food colouring to make the colours ‘explode’.

You can get a similar result with just water and pepper.

What is surface tension?

Water molecules are really good at pulling each other closely and tightly together but gas molecules in the air are not! These gas molecules don’t want to hold hands with the water and want to stay on their own, running about like crazy and never staying still (I can relate).

Water and air don’t get along

Because the gas molecules outside the liquid don’t want to make friends and hold tightly to the water molecules, all the water at the outside of the container – or the people on the edge of the huddling-hand-holders – have fewer hands to hold onto… The molecules at the surface or the people at the edge get a bit lonely.

Washing-up liquid is a type of soap and contains something called a surfactant. They are named so because they are surface active. They act on a liquid surface. The soapy molecules are brilliant because they make really good friends – they can be energetic and play happily with gas molecules, but they can also huddle and hold hands with water molecules. When you add them to the water they spread out all over the surface of the water keeping the huddling water and the hyper air apart. Now that neither the water or the gas see each other, everyone is a lot happier.

Why does the colour explode?

So the soap spreads out across the surface, what’s that to do with the colours we see?

As the soap spreads out across the surface it is replacing the water that used to make up that skin on the surface.

Since you dropped the soap into the middle, that’s where the tension gets released! The soap hasn’t reached the edges of the tray yet so the water at the surface there is still pulling away and under tension! Those water molecules pull everything along towards the edge and that carries all that colour along with it.

There are some additional effects from the fat in the milk – but I don’t think they are the real driving factor here. Some sites will say that the fat is all that matters because you get different results with different amounts of fat in the milk – which is a fair observation to make. The fat is definitely important but since this effect is mostly seen at the surface – surface tension is the real key player to watch.

Make your own explosion of colour!

This is an easy one and always impresses. Try making your own explosion of colour and snap a pic, share it with everyone with #XPeriMas on twitter!