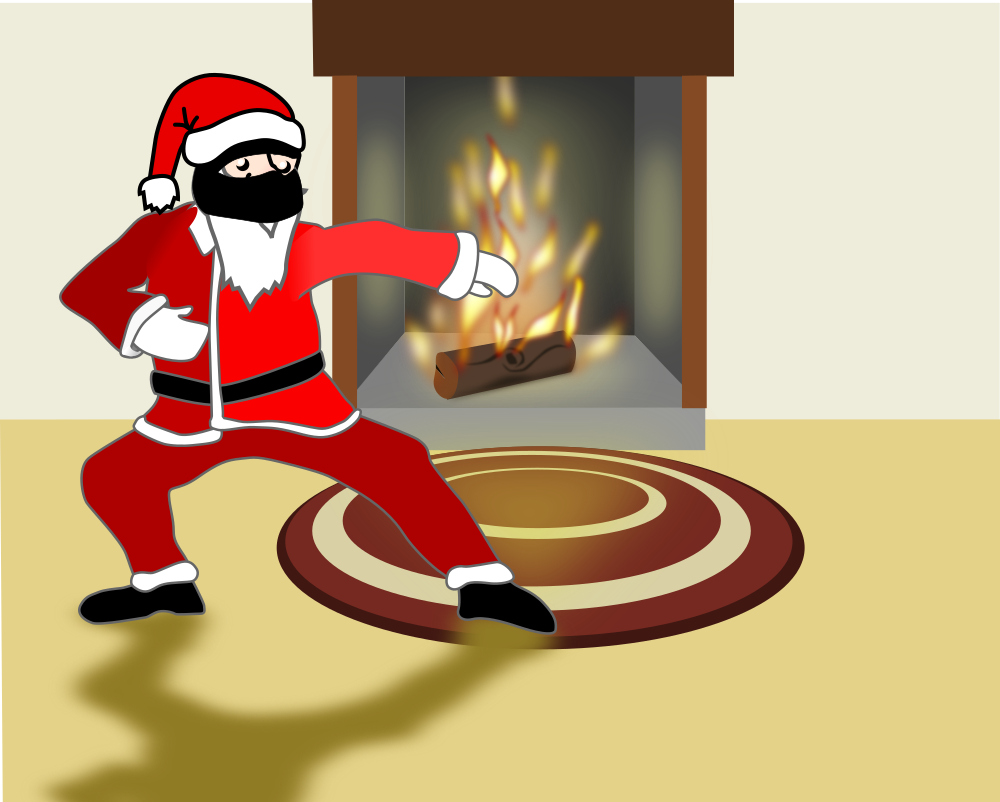 There are some amazing and curious minds out there. Marvellous Marthy has asked us: “How can Santa sneak about the house without waking anyone up?” This question got my mind racing… Are there North Pole Ninjas? Does he levitate? There is an easy answer to this: obviously Santa is magic! His boots were made by Elves and that’s why he’s as quiet as Legolas. But… what if he wasn’t magic? How does sneaky Santa stay silent?

If you wanted to sneak around your house and drop off any presents this Christmas – for whatever reason – we’re suggesting nothing! How could a muggle sneak around the house silently?

Sound is detected by your ear drums vibrating backwards and forwards. Anything that makes a vibration will also make a sound! These vibrations move best through solid things. That’s why if you want to hear through a wall or door it’s best to put your ear flat against that surface. Sound vibrates strangely through liquids, which you’ll know if you’ve ever put your head in the bath with music on or been to a swimming party and gone underwater while people are shouting. Sound can also move through the air as waves of sound – this is usually how sound reaches your ears.

These waves of air moving about are what we need to avoid if we want to keep things silent for Santa so he can sneak in and leave presents.

Two hard surfaces coming together make a lot of noise because when they hit each other neither one of them squishes or changes in any way. The impact bounces around and reverberates around both surfaces – and these vibrations move the air around the objects and we get a noise.

When two soft objects crash into each other the impact gets spread out over time as the objects squish together and change shape. The vibrations can’t move through the squishy objects as easily and less air gets turned into those noisy sound waves.

How can we measure sound?

First off, we’re going to need a way to measure sound. The unit of sound is the Decibel. If we want to measure how silent sneaky Santa sounds we’ll need to measure some Decibles!

Where on that list do you think that footsteps would come in? Ive used this online sound meter to record walking around the house in some big boots like we always see Santa wearing to see how loud that is in Decibels.

So tip toe takes a big chunk of that noise away!

If you want to learn how to move silently like Santa you need ninja techniques.

Nuki Ashi is a Japanese term for how ninja’s walk silently. The trick is to use the outside of the front foot to reach out and feel what the floor is like where you’re planning to put your foot down. Gently press to see whether there will be any movement or noise in the floorboard there. Back off if you need to. Keep your knees bent and really gently start to transfer the weight from front to back. Repeat.

This works in the same way as your tip toes but allows you to keep your balance a bit more easily.

What if we don’t have time to go to ninja school? Are there any ways we can use some science to help us move silently like Santa? There are a few ways we could go with this.

As we said right up at the top, sound is caused by hard surfaces coming together. Sound is reduced when two soft, squishy things come together. It’s much quieter to walk over cushions than on a hard wooden floor!

We could use that trick to cover the outside of our shoes in a soft, squishy material. You normally wouldn’t do this because the soft materials would get worn away by the floor and your shoes wouldn’t last very long! But for one night a year, this could help us to be sneaky silent like Santa.

Interfere with the sound

There is another, fancy way to reduce sound. If you’ve ever used a pair of noise cancelling headphones there is a chance that you’ve experienced this already. We’ve already learned that sound in the air is made up of waves – the molecules in the air are all bunched up and then all spread out and it changes back and forth like that as the wave moves through the air.

Santa is magic, so his elf shoes probably do all of these things. He is probably part ninja, walking with his perfect Nuki Ashi technique. The elves make the boots out of soft, squishy material that doesn’t make much noise. And of course, Santa uses noise cancelling technology to help mask any noises he does make!

A huge thank you to the Marvellous Marthy for her question about Christmas! If you’ve got any more questions then we’d love to hear them. Tell us all about them on Twitter at #BoomAdvent.