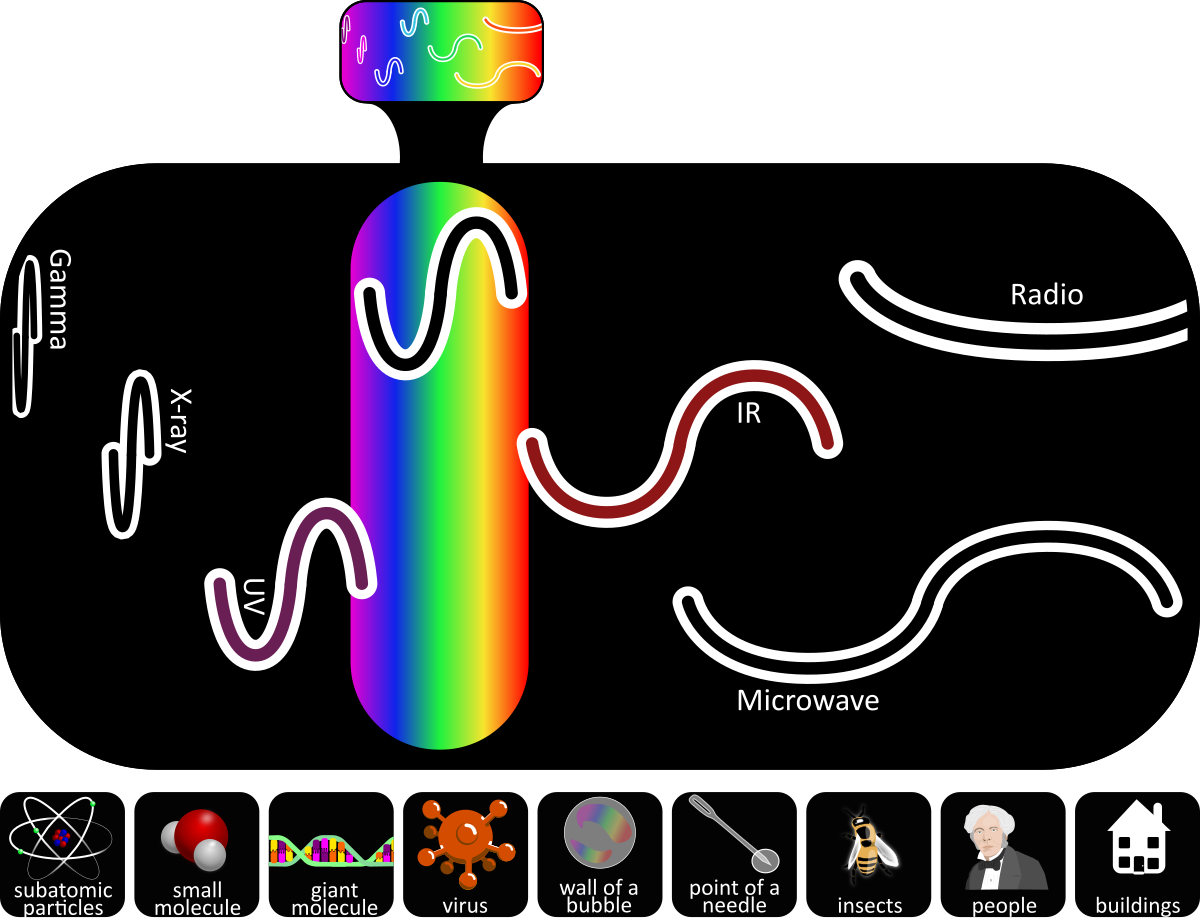 Have you ever decided to paint something? Maybe the house, a picture or something you have made. The big question is what colour to paint it. There are so many colours to choose from. You only have to look through those colour guides to realise that are hundreds of different colours. But what is colour?

Let’s be clear, there is a lot about colour that involves the way our eyes and brain work. We have already seen how important the molecule retinal is for helping us see. However, here we are going to explore the science of light or, to be more specific, the physics of light.

We can describe different types of waves by something called their wavelength. If you imagine a wave like a long line of hills and valleys, then the wavelength is the distance between two neighbouring hills (or valleys). Typically, the shorter the wavelength the more energy the wave has.

Light has some strange properties; it can behave as both a wave and as a particle. We are all familiar with light as rays or waves, but as a particle? The particle associated with light is a called photon. Photons are mysterious things. For one thing they have no mass and no electric charge. However in the weird world of quantum mechanics, photons are very important. We will leave photons here for now and go back to light as we are more familiar with it.

I can see a rainbow

Pure visible light is white in colour. However, when light shines through a prism it splits into a range of different colours. These colours and their pattern might look familiar. Indeed, it you don’t have a prism you can see a similar effect in a rainbow. Both prisms and rainbows show a series of seven colours: red, orange, yellow, green, blue, and violet.

Some of you might already be thinking that there are a lot more colours than the seven we have described. What about brown, or purple, or pink? Well they are made from a mixture of different wavelengths – in other words from a mixture of colours.

Why is the sky blue?

So what makes items or substances are certain colour? Well this depends on how the light is scattered, reflected or absorbed.

Scattering is a complicated process, but can be thought of as the light wave being forced to stop moving in a straight line. This could be because of particles or other energy waves. One important type of scattering is called Rayleigh scattering. You might not have heard of it, but you’ll definitely have noticed it. When light from the sun passes through our atmosphere it can be scattered. The scattering is strongest for shorter wavelengths such as blue. In a simple sense, this is the answer to the age old question, why is the sky blue?

How about plants? Most people will draw plants or leaves with a green colour. You only have to look out your windows and you will likely see some green plant, bush or tree. The green colour is due to a molecule called chlorophyll. Chlorophyll absorbs blue light very strongly, and some red light too. However, it reflects more of the green light, which is why leaves and plants appear green.

Some substances absorb all light of all wavelengths. Without there being any light reflected, the object appears black. In some sense, the colour black can be thought of as what your brain fills in when an object reflects no light into your eyes.

Remember photons? Well, one important feature of photons, and light in general, is how they can interact with electrons. Electrons are tiny, tiny negatively charged electrons found in atoms. Atoms of elements such as hydrogen only have one electron. However, by the time you reach atoms of the element gold, you have a whopping 79 electrons.

When light, or technically photons, of specific energies hit an electron, they can transfer that energy to the electron. This extra energy allows the electron to move to a higher level. However, the electron cannot keep hold of this extra energy for long and eventually releases it. The light is then emitted and the electron moved back to its original, lower level. The light emitted can sometimes be visible light and so we can see it. This is also known as fluorescence.

This time of year is full of colour and lights. Against the dark, cold nights the world is lit up with reds, blues, yellows and greens. The nature of light is both complicated and fascinating, but who can argue with the results? Green trees, blue sky and a variety of other colourful things.