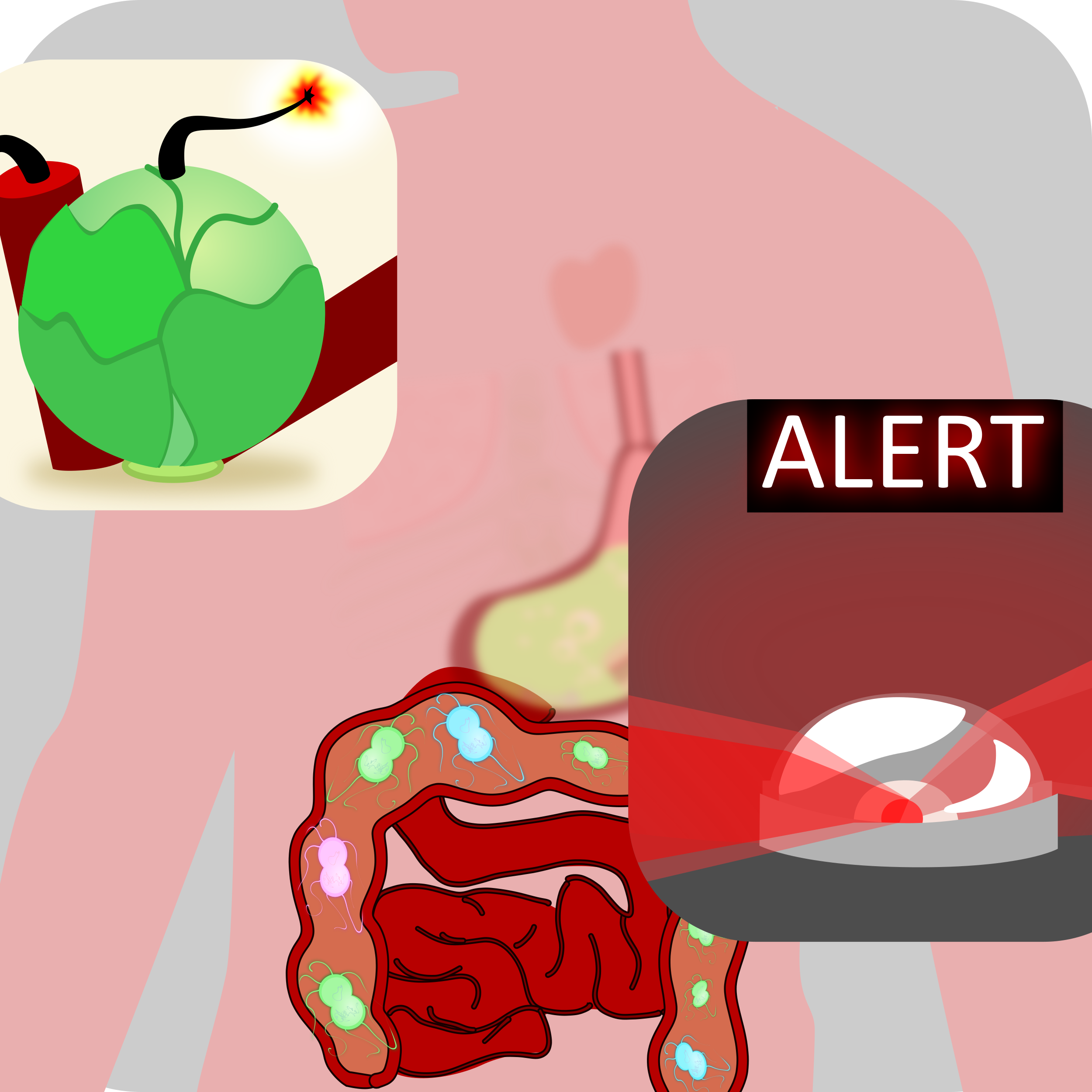 We’ve mentioned lots of molecules that smell so far in Boom Advent, but what about the smelliest smell of all? That one smell that can send your entire family fleeing from the dining table on Christmas day. We’re talking about sprout farts. We’ve all been there – everyone sat around eating Christmas dinner when all of a sudden…

…someone drops a sprout bomb…

…and we all know we’re in trouble.

Don’t pretend you’ve never blamed it on the dog!

But what is it about sprouts that makes our bottoms burp?!

Sprouts (and cabbages and other leafy greens, actually) contain really complicated molecules found in some plants that we humans can’t digest on our own.

Normally your food reaches your stomach where it is digested by enzymes, or reaches your gut where bacteria help to break it down into manageable “chunks” for your body to use.

The issue with sprouts is that they contain high levels of molecules called cellulose and raffinose. Luckily for us, our gut contains bacteria which help us to digest these molecules. Unluckily for us, this process releases a lot of stinky gases which end up as… well… you can probably guess!

Plants use raffinose to store and transport carbohydrates but it is too big for our bodies to do anything useful with so it must be broken down into more simple bits by an enzyme called alpha-galactosidase (α-GAL). Think of enzymes as chemical knives and forks – they are big protein molecules that interact with smaller molecules and chop them up into even smaller components that our bodies can utilise.

Renting out our Guts

Unfortunately, our bodies can’t make α-GAL, so this is where we rely on the bacteria in our gut to lend a hand, as fortunately they can produce it.

It’s a bit of a win-win situation really, as we give the bacteria somewhere to live, and they pay their rent by breaking down molecules that we can’t digest into useful things like short chain fatty acids (these are really good for us!).

At the same time as these bacteria produce useful things, they also spew out gases that contain sulfur. This is where the sprout farts get their odour. People always mention methane when they talk about farts but believe it or not – methane has no smell at all! In fact a smell is added to natural gas in your oven (methane) so that you can smell it. It’s the sulfur that makes the sprout farts smelly.

Generally chemists are afraid of any chemicals that contain sulfur becuase they usually stink! If it has ‘thiol’ or ‘mercaptan’ in the name – from ancient ways of describing sulfur – it’s probably offensive to your nose. If your farts contain sulfur compounds from the sprouts it’s time to hit that red alert for a sprout bomb!

We have a complicated relationship with sulfurous gases. While dilute, these smells imply healthy plant-based food – good for you.  The smell of sweetcorn relies on hydrogen sulfide, for example. However, when concentrated the exact same smells imply death and decay – that’s why they repell you when stronger.

Why does Alex know so much about Sprout Farts?

This article was actually written by Alex! It’s her first ever article so if you like it, let us know.

Alex spent a long time studying this stuff because it interacts with so many systems in our bodies, like the immune system, nutrition, our mood. It’s all very complicated stuff. She’s trying to unravel the mysteries of the twisted up innards inside you.

All the bugs in your gut make up a rich and diverse community. It’s also very dark and there’s no oxygen deep in your intestines – that makes it really hard to grow the bacteria in the lab! Research aims to find out how all these bacteria interact with you and hopefully help them to help you! The bacteria are there anyway, so it’s an easy way to healthy. If you look after them, they’ll look after you. This is the idea behind foods that call themselves prebiotics (they contain food specifically for the bacteria in you gut) or probiotics (they contain extra bacteria that hopefully make it through the acid of your stomach to reach the gut themselves).

Give Sprout Farts a Chance

There’s a lot of cool stuff locked up in there that could help us learn about other things! So next time you sniff a sprout fart, before you hit that red alert and all flee from the Christmas dinner table, remember it’s all just a sign of healthy digestion. Your gut bacteria have got your back!