Cyclopropane: That has a nice ring to it 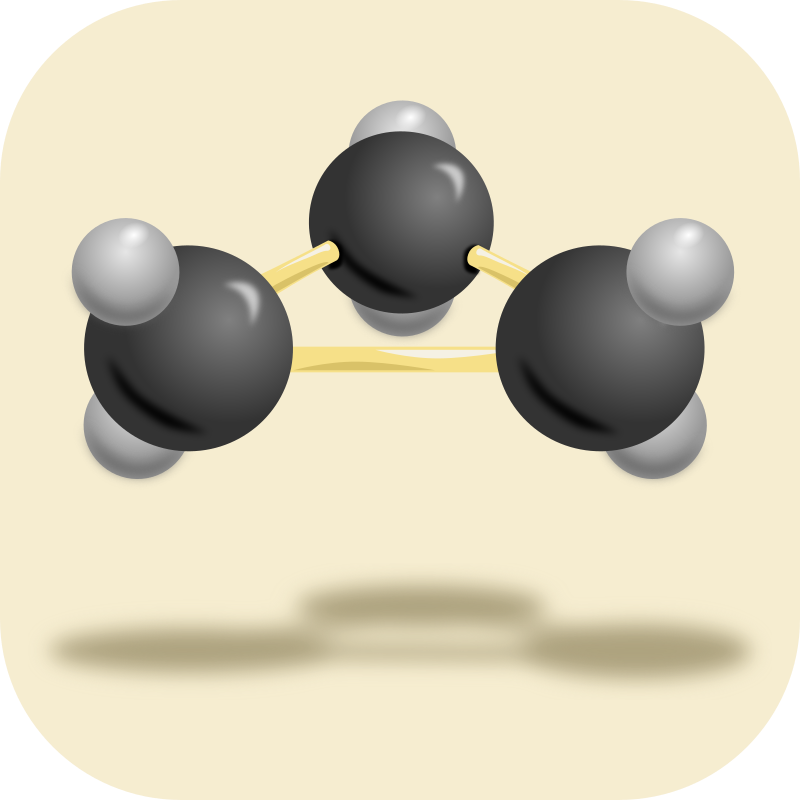 The Appliance of Science

There are many wonderful reasons that make chemistry, and science in general, so exciting. The first is being able to improve and influence the world we live in. Inventions and advances in medicine, technology, and many other areas have transformed our lives, mostly for the better. This month’s molecule – cyclopropane – can help us see science in action!

The other reason is to understand the Universe and how everything works. Science allows us to answer the big questions, but also forces us to ask many questions as well. There is also great fascination with the weird and the unusual. Those things that don’t look quite right, that shouldn’t exist, or look so unstable that the slightest nudge might break them. This is where cyclopropane comes in..

Chemistry is full of strange and wacky molecules. These molecules can contain exotic elements, they can be extremely reactive or incredibly unreactive, and they might contain unusual bonds. They might also have very interesting shapes and structure, and this month’s molecule certainly does.

Say hello, to the three sided ring molecule that is cyclopropane.

You might have already heard about this molecule. We covered in briefly in our Christmas post about the shapes and structures of different molecules. So why is the shape of this molecule so important – why does it matter?

Try it from this Angle

Well to answer this, we need to quickly look at how carbon atoms bond and the ideal shapes for molecules.

Ideally, when an atom of carbon bonds to four other atoms, such as hydrogen or carbon, then the angle formed should be 109.5°. This a little wider than each angle in a square, and is closer to each angle in a regular pentagon.

In molecules such as methane (CH4), ethane (C2H6) and propane (C3H8) most of the angles are around 109.5 degrees. However, take a molecule of propane, join the ends together, remove a couple of hydrogens and you have cyclopropane. Cyclopropane has a triangle-like shape, but this means that the angle between the carbon-carbon bonds is closer to 60°, very far from the ideal 109.5°.

The angle is so severe that the bonds between carbons atoms are known as bent, or banana bonds. In fact in order for this molecule to even exist at all, the way to atoms bond to each other has to change, although the details of this are rather complicated.

As you can imagine, forcing something into a shape that it really doesn’t want to be in, is going to make it very strained and desperate to be in a more comfortable shape.

For example, if you take a plastic straw and join the two ends together, the straw will bend and you can form a circle. However, the straw is not particularly stable as a circle, and as soon as you let go of the straw, it goes back to being straight.

So, back to cyclopropane…

I want to break free…

The 60 degree angles in this molecule mean that cyclopropane suffers from extreme ring strain and really wants any excuse to break its ring structure. This makes it a rather reactive molecule.

Okay, so cyclopropane is a cool looking molecule, that is interesting because of the unusual bonding, but something so strained and reactive is not going to be useful at all, right?

Well as it happens, cyclopropane has had some uses outside of chemistry textbooks and research labs.

You won’t feel a thing

In the past, it was used as an anaesthetic, with its fast acting property, non-irritability and sweet smell making it ideal. However, it wasn’t without its risks. Prolonged use could result a sudden decrease in blood pressure, which is not good. Its potential to explode when mixed with oxygen has seen it replaced by more modern types of anaesthetic.

Nowadays, cyclopropane has limited commercial use. However, there are larger, biological molecules that contain this strained ring structure.

Put a Ring in it

A class of molecules known as the pyrethrins contain a cyclopropane ring at the centre of its structure. These molecules are often used as insecticides and repellents.

Despite its ring strain and reactivity, there are a couple of ways to make cyclopropane.

A surprisingly simple way is to take a molecule called 1,3-dibromopropane (basically a propane molecule with a hydrogen at each end replace with a bromine atom) and react it with sodium. This produces cyclopropane and sodium bromide. It was this reaction performed in 1818 by August Freud that led to the discovery of cyclopropane.

Chemists have since invented many different ways to make cyclopropane rings. Most of these involved a very reactive form of carbon known as carbenes.

The ability to change the world and answer the big questions are some of the most exciting reasons for doing chemistry. However, discovering, understanding and playing with the more unusual looking molecules is just as fascinating.

Cyclopropane is certainly an interesting molecule, bent into a highly strained triangle shape, that is far the idea geometry it would like to be. This also makes is a reactive molecule.

However, even molecules such as cyclopropane can find uses, even if they are eventually replaced by more modern substances.

It goes to show that in science, shape and structure is just as important as everything else.