Prostaglandins – Bringing us into the world 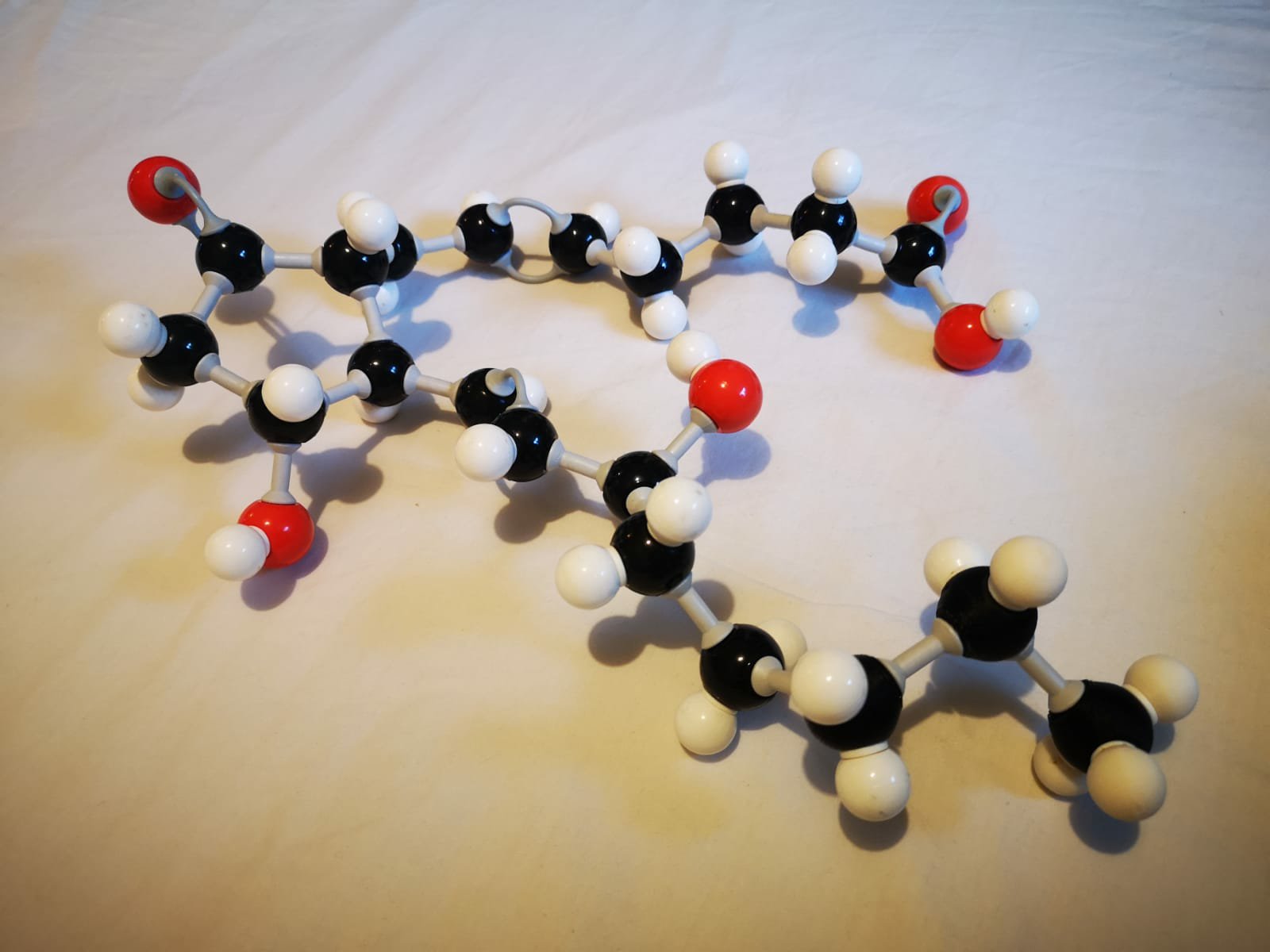 Alex – who you might remember from the article all about Sprout Farts– is having a baby in August (it’s a BOOM! Baby rather than a baby boomer..) so we thought we’d make this month’s molecule a topical one. So let’s say hello to the prostaglandins, which play a role in bringing us into the world.

Prostaglandins are a class of fatty lipid molecules that play a big role in the process of giving birth. It’s an important thing to understand since it’s where we all come from so we’ve done the labour for you. Let’s find out how prostaglandins help with bringing us all into the world.

The different names for prostaglandins use a letter and a number to describe how many double bonds the molecule has and where those bonds are.

The first real studies of prostaglandins began in the 1930s. However, it would take nearly 40 years before anyone was able to synthesise any type of prostaglandins. Whilst our body is able to make these molecules, it proved very challenging for them to made in a lab. As you’ll see in the picture below – this molecule is complicated!

This prostaglandin – E2 – contains lots of complicated chemical groups and structures. You might remember chirality from some of our earlier Molecule of the Month posts (hay fever medicines and lactic acid)- there’s a lot of chiral centres in this molecule! It’s no wonder it took people a long time to make this molecule in the lab. But, as usual, biology is naturally more talented than we are… Let’s find out how it’s made in the body.

In our bodies prostaglandins are actually made from arachidonic acid.

Arachidonic acid pops up a lot in lipid synthesis and some of the more complicated lipid-like biomolecules. Here it is in Phil’s thesis which was all about lipids and how they behave in the cell membranes that keep all the useful stuff inside our cells.

There is some debate about whether the synthesis of prostaglandins or the printing out of Phil’s thesis was more challenging! [A note from the editor (Phil): one was a Herculean task that took several years and literal blood, sweat and tears, the other was just some chemists making a molecule.]

Arachidonic acid be converted into prostacyclin and other molecules that are involved in inflammation. Painkillers like ibuprofen, known as NSAIDs, work by preventing the enzymes that convert arachidonic acid and therefore prevent the inflammation. Unfortunately, this also means that ibuprofen will prevent the formation of prostaglandins, which turn out to have pretty important roles to play in bringing us into the world!

The cervix is the opening to the uterus and so it is crucial that it stays closed and firm until the baby is ready to be born. When that time comes though, the cervix has to rapidly change and allow the baby to be born safely (for both the baby and the mother!).

Many parents-to-be will hear all about prostaglandins through classes, courses, or information from hospitals. Usually though this information is about how hospitals might induce the birth of a baby. This is effectively triggering the birth to start sooner than it naturally would and can be done to protect the mother, the baby, or both. For example, information from the NHS.

As pregnancy progresses prostaglandins increase in blood plasma – thought to be produced from placenta membrane.

Once the changes to the cervix have happened and the path is clear for your entry into the world, all that’s left is a little effort from mum. Okay, a big effort. A lot of muscular exertion in pulses called contractions.

You might be wondering how tightening muscles can make an opening bigger. After all – flexing your muscles makes them look bigger doesn’t it? The difference is that the muscles in your arms are in a straight line, attached at your shoulder at one end and elbow at the other. When they contract they get shorter and bulge up away from your arm so look bigger.

When muscles are in a circle though, contracting will actually pull muscles towards where they are attached and away from the opening in the middle! Here’s a model to show you what we mean.

So when the muscles of the cervix contract, the opening gets bigger.

Prostaglandin E2 is sold as dinoprostone and is used to help in induce labour.

It can also be used to keep the ductus arteriosus open. This is an important blood vessel that allows blood with low oxygen levels to leave the heart and miss the lungs. Normally, this blood would pass through our lungs where it would be filled with oxygen. However, when in the womb, this blood vessel allows blood leaving the heart of a foetus to go through the umbilical cord to the placenta to receive oxygen.

Normally, the ductus arteriosus closes after birth, but sometimes it needs to be kept open. This is where prostaglandin E2 is so important because this molecule can delay the ductus arteriosis closing giving the medical team time to assess the situation.

Welcome to the world.

As far as bringing us into the world is concerned, few molecules could be higher on the important list than prostaglandins!

Teaming up with oxytocin, the fatty wonder of prostaglandin E2 works miracles in turning the cervix from the protective barrier that keeps the baby safe as it develops into the passageway into the big wide world. We’ll be back next month, probably with a new, tiny member of the team. See you then.