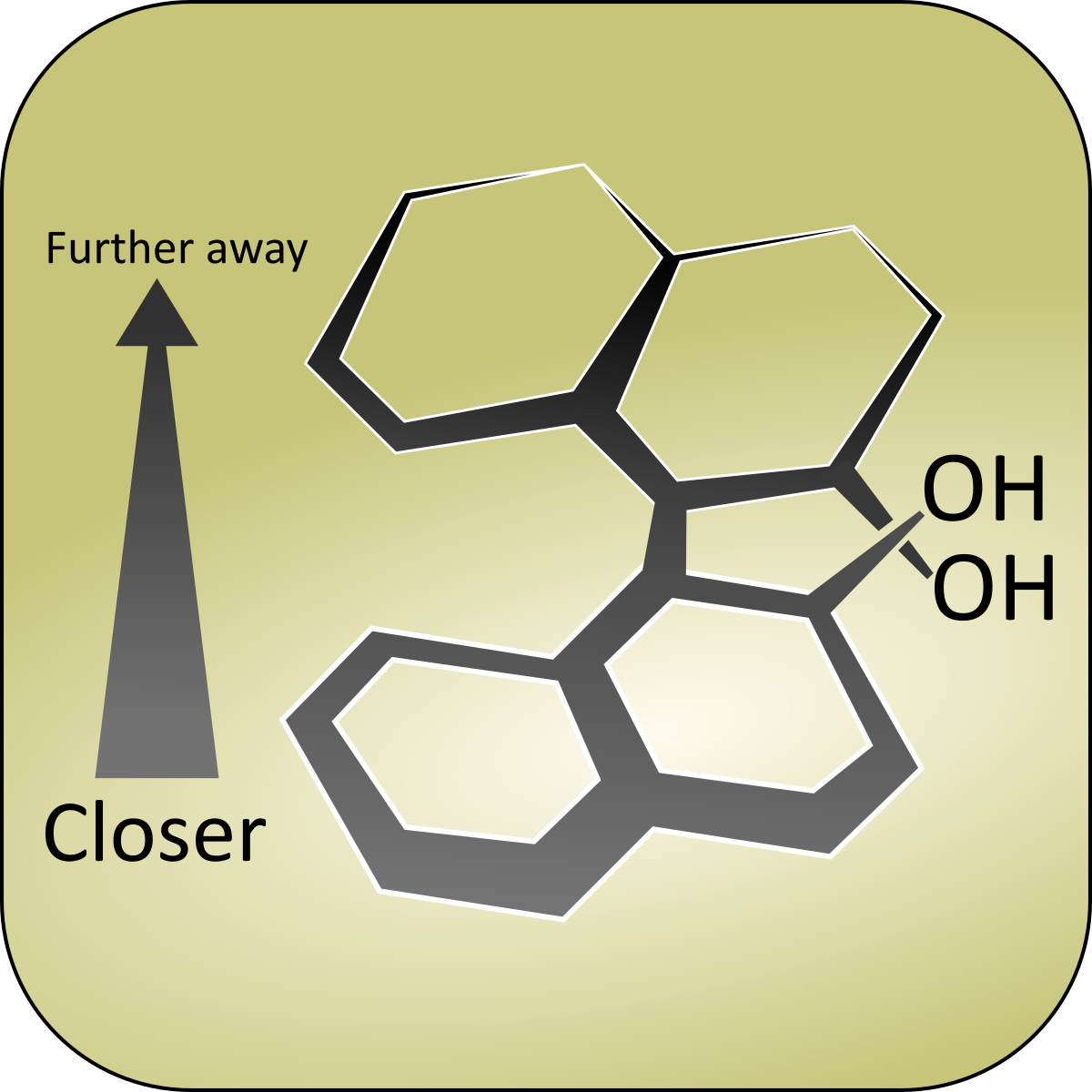 Chemists are famed for their ability to make molecules or materials. They can make molecules found in nature or create completely new ones. Sometimes they can even start with natural molecules and make them better. To create these molecules, chemists have lots of different reactions they can use. By using these reactions, chemists can add or remove different atoms from molecules. Recently, the Nobel prize for chemistry was awarded for scientists developing a new tool to make these molecules selectively – BINOL!

Problems in the Lab

However, making molecules is very difficult. Reactions can be difficult to control, and often unwanted reactions can occur. There is also the problem of different molecules being produced by the reaction.

Magic Mirror on the Wall

As a result, the reaction produces two molecules that have the same atoms, but are mirror images of each other. This is an example of chirality.

You might remember we covered chiral molecules when we looked at cetirizine. We call each mirror-image an enantiomer.

Even though they have the same chemical formula, two enantiomers can have different effects, especially on the human body.

Carvone is a molecule that has two enantiomers. One of them tastes like spearmint, and the other like caraway. How amazing is this? Two molecules that are exactly the same, except for being mirror images of each other, can have two different tastes!

As a chemist making a new molecule we might only want to produce one mirror image and avoid the other. If we are making a new drug molecule, it could be vital that we only produce the one molecule.

Chemists use a process called asymmetric synthesis to help produce only one mirror image of the molecule.

The Nobel Prize for chemistry in 2021 was awarded to Benjamin List and David MacMillan for the development of asymmetric organocatalysis.

One example of a molecule used in asymmetric synthesis is 1,1′-Bi-2-naphthol, otherwise known as BINOL.

BINOL is a white solid with a melting point over 200°C.

BINOL is a molecule made from two molecules of naphthalene joined together by a single bond. Each naphthalene ring is also bonded to an OH group.

The single bond between both naphthalene rings allows them to spin around. However, because these are rings are so bulky they cannot spin completely around. As a result, the molecule is becomes locked and can only rotate so far.

This means that BINOL is chiral and so can form mirror images of each other. We can then attach one of these mirror images to a metal catalyst and use it during a reaction. Because BINOL is big, bulky and has a very specific shape, it can be very useful in making sure the reaction produces the correct mirror image.

Making BINOL is simple to do. However, it is really difficult to make the specific enantiomer you want. We can make one enantiomer by reacting 2-naphthol with copper chloride. Another method is to create both enantiomers and then separate them out.

BINOL is also a starting point for other asymmetric catalysts. For example, if we take the -OH group and replace it with a phosphorus atom and a few more benzene rings we get BINAP, another well-known and popular catalyst.

There are many different types of reaction that use BINOL. This helps chemists in making the correct enantiomer they want from a reaction.

Look into a mirror and everything you see is the same. Wherever you move, your mirror image follows you. Whatever you look or wear, the mirror image has the same.

For molecules the same is very nearly true. However, two enantiomers may contain the same atoms, bonded in the same way, but can have two very different effects. This is why chemists sometimes need to produce only the one enantiomer.

We can use asymmetric catalysts in reactions to help us produce only one enantiomer. BINOL is a good example of such a catalyst. It’s big, it’s bulky, it’s BINOL!