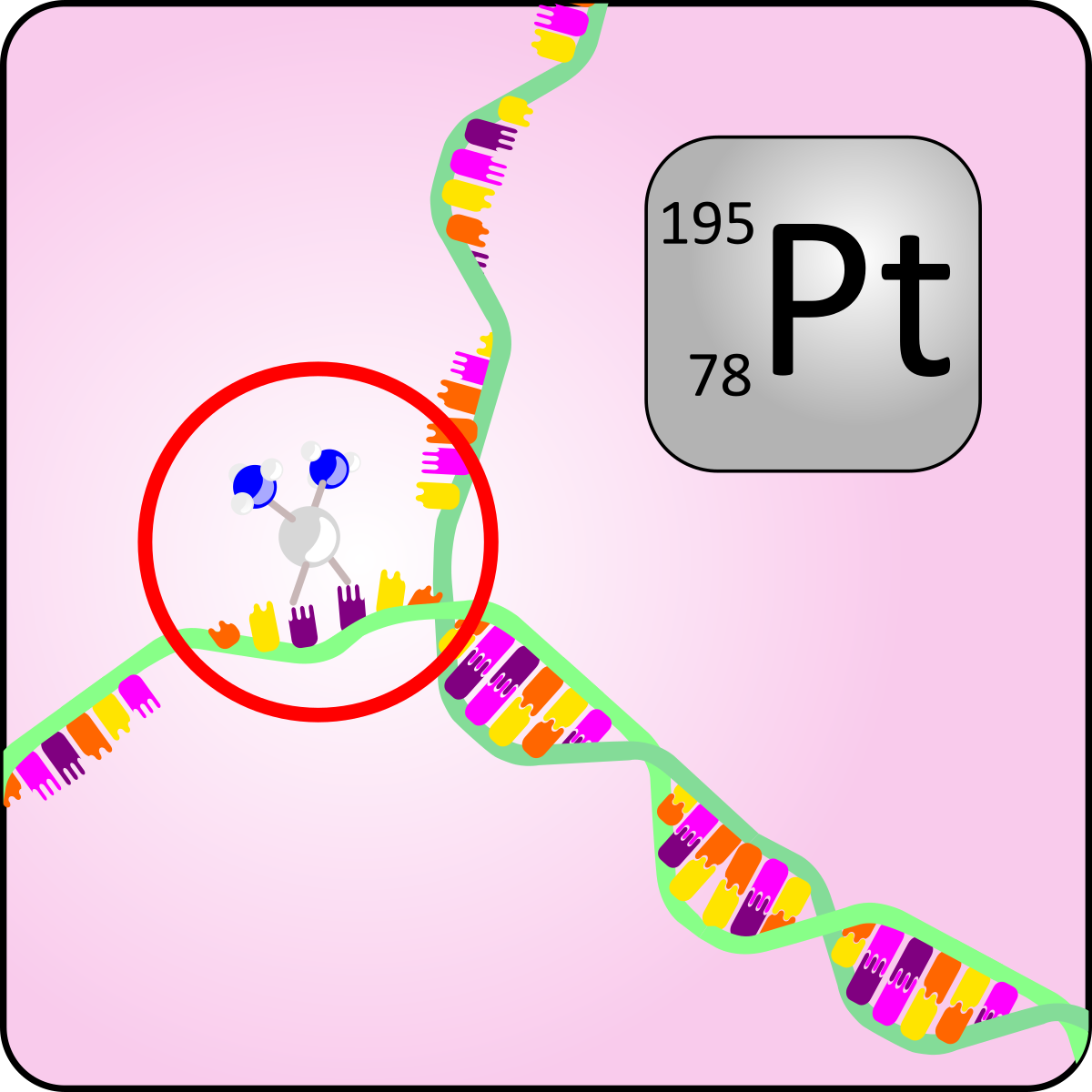 This year marks 70 years since Queen Elizabeth ascended the throne. In June, the UK and many countries around the world will celebrate the Platinum Jubilee. But why platinum? Well many anniversaries, such as wedding anniversaries, have different materials associated with a certain number of years. Silver celebrates a 25th anniversary, gold is for 50, diamond for 60 and finally platinum is for a 70th anniversary. So what would be our platinum choice of molecule? Cisplatin!

Platinum is a metal found in the middle of the periodic table. It is a very unreactive metal, but a very good catalysts. Because of this, platinum is used in catalytic converters to help reduce harmful emissions from car exhausts.

Platinum is also a very valuable metal. It is a rare element, with very little found in the Earth’s crust.

Platinum has many uses, but one of its most important is the drug cisplatin.

At the center of cisplatin sits an atom of platinum, to which is bonded four ligands. Two of them are atoms of chlorine, and two of them are molecules of ammonia (NH3).

The four ligands bond in such a way that the overall structure has a square shape. The fancy name for complexes with this shape is square planar. The two chlorine atoms are next to each other on one side of the complex, and the two ammonia groups lie directly opposite.

It is this arrangement of the ligands that gives the complex its “cis” name. In fact, its proper name is cis–diamminedichloroplatinum, but cisplatin is much easier!

Cisplatin was first described in 1845. It was known as Peyrone’s salt, but it would take another 50 years before it’s structure was determined.

However, it was 100 years later, in 1978. that cisplatin was approved for use to treat cancer.

Pharmacology is the study of what a drug gets up to once it is inside you. The pharmacology of Cisplatin is all about your DNA and your genes. Remember the coiled long chain molecules wrapped up in that famous double helix?

Don’t worry – our articles on all things genetics (including how unique you are and whether you’re half banana) and gene editing through CRISPR will fill you in if you’ve forgotten!

Long story short our cells need to reproduce… a lot! Since each cell needs to have its very own copy of your entire genome (every bit of your DNA), your body has to make an exact copy of all your genes each time. The first step is to pull apart the two chains in that double helix that were stuck together with the chemical version of velcro.

Another way to think of your genes is like… well, like jeans! I’m sure you’ve all used a zip before. There are two separate sides that can be brought together by pulling on the zipper and then they stay stuck. But if something gets in the way and blocks the zipper from moving, your zip can get stuck and break! With jeans this means you can’t get your clothes on (or off!). In genes it means that whichever cell this bit of stuck-zipper-DNA is in can’t reproduce. That’s bad news in healthy cells!

Not all cells are healthy. Unfortunately some cells lose track of how often they are supposed to reproduce and have no limits. The problem then is a clump of cells that have no limits grows and grows and forms a tumour. These cells are cancerous.

Your body’s natural defences to cells reproducing too fast can get overwhelmed. That’s when those cancerous cells can cause the disease cancer. It’s a horrible disease and, rightly, finding a cure for cancer* is the first thing the public think scientists do.

If the body’s defences are overwhelmed it’s time to call for some extra support restricting the reproduction of those cancerous cells. It’s time to block those jean zippers! I mean, zipped genes.

Cisplatin: Getting in the way

Remember cisplatin from all those paragraphs ago? Turns out it can fit into our genetic jigsaw where only other bases are meant to go. Where two base pairs are meant to fit snugly together and hold those two chains of DNA together in the double helix, cisplatin can stick to one of the base pairs instead.

Could you find the ciplatin in the graphic above? Just for those who missed it:

Now the biological machinery that chomps along that chain copying all the instructions perfectly gets stuck at the cisplatin and can’t get past it! The zipper in your jeans (sorry, genes) has got stuck on this piece of platinum fluff.

That means that this cell can’t reproduce. It’s stuck. So no more cancer… right?

An Aside on Side Effects

But that is unfortunately not true. Whenever a cell is replicating and it has unzipped its jeans, cisplatin has a target to hit. If any of that molecule has got into this particular cell it might drift past those unzipped genes and get stuck into that zip. Whether this cell is healthy or cancerous, it now can’t replicate.

This means that cisplatin hurts all the cells in your body.

There are a few advantages for healthy cells though – they don’t replicate as often, so their genes are kept zipped up for more of the time than cancerous ones. That means the proportion of the time they are ‘open’ to a cisplatin attack is smaller.

So you may be thinking that cisplatin is going to impact those cancerous cells more than healthy cells? Unfortunately it’s not as simple as cancerous vs healthy cells. It’s more like rapidly reproducing cells vs slow reproducing cells. Cells that reproduce fast include our cancerous targets but also the lining of your stomach that protects you from digesting yourself and the follicles that produce your hair, amongst others. The side effects of cisplatin are that any cell that reproduces fast will be hit.

A war of attrition

It’s a massive shame that it comes down to ‘which cells can recover faster?’ and ‘how much punishment can the healthy part of the patient take?’ but that’s the truth. Cisplatin and drugs like it take a terrible toll on patients who take those drugs. The only consolation is that the healthy cells can recover faster and are targeted less, so over time the damage accumulates on the cancerous cells and eventually the tumour is reduced to the point where your own body’s defences can take over again.

Since cisplatin was first used in cancer therapy (1978-1979 – you can actually read the initial scientific journal discussing the use of cisplatin in the UK here) there have been a huge number of changes made to the cisplatin molecule in the hope that it can be made more specific for certain types of cells. Some modifications make the molecule bulky so that it is harder for it to fit into the ‘zip’. Others add on a marker that acts like a signpost in the body to take the drug molecule to the right types of cell.

One thing is for sure though – there is still progress to be made and future developments will make this drug the real platinum choice.

*A cure for cancer is often talked about as something that scientists should click their fingers and achieve quickly. Unfortunately there are thousands of different types of cancer in billions of different people and so there is no specific combination of drugs needed to treat someone absolutely perfectly. Advances and progress in cancer treatment are made all the time and people who choose to work in cancer research are absolute heroes who give their whole lives to making “The Big C” a little smaller.