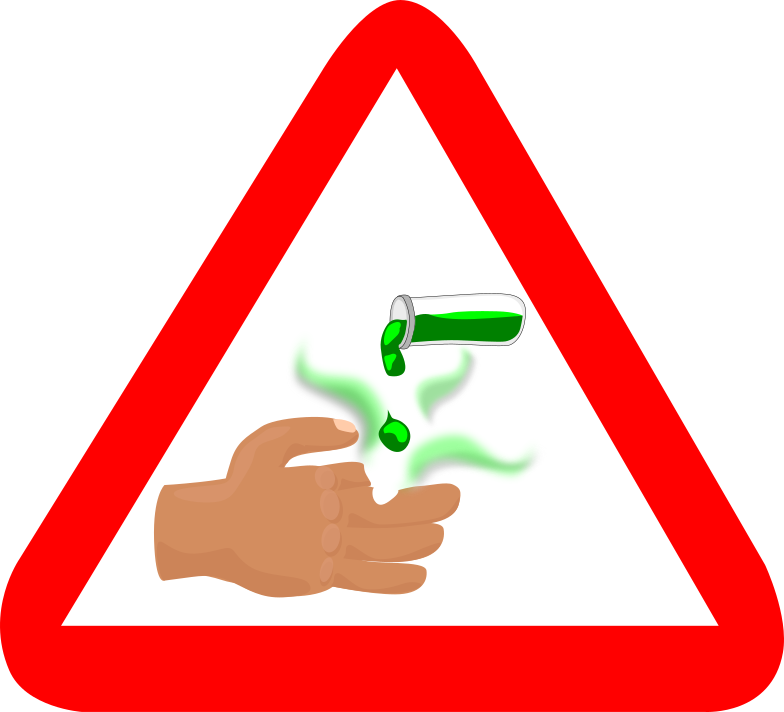 Acids and salts seem like very different things. Acids taste sour or are corrosive liquids. Salt is the stuff you throw into your food to improve its flavour. That seems like simple chemistry – so we’re done here right? Sometimes it really is that easy and life’s a bleach – I mean beach!

This month’s molecule, sodium hypochorite, is also an example of salt, made by reacting sodium metal with hypochloric acid. Be warned though, this is definitely one type of salt you do not want to throw on your chips! You are likely to have come across sodium hypochlorite since it is the main component in most household bleaches.

Before we get into the details of this commonly used molecule, let’s have a look at what acids and salts are.

A non-basic approach to acids

From a chemistry point of view there are three main ways of defining an acid. The simplest was proposed by Swedish scientist Svante Arrhenius in 1884. Arrhenius’ definition of an acid, was any substance that produces hydrogen ions[2] (H+) in solution. For example, if you take some solid hydrogen chloride (HCl) and dissolve it in water, the compound will break apart (technically we say dissociate) to produce H+ ions (and also Cl– ions).

This definition is not too bad, but in 1923 two chemists, Johannes Brønsted and Thomas Lowry individually came up with a better definition for an acid, and perhaps one that is more relevant here. In Brønsted-Lowry theory, an acid is a hydrogen ion donor. All acids that can be defined by Arrhenius’ theory can also be defined by Brønsted-Lowry theory[3].

We now know what the definition of an acid is, but there is one more thing we need to be aware of and that is the strength of an acid.

How do you take you acid? Weak or strong?

Before we start, let’s clear one thing up. When we talk about a strong or weak acid, we are talking about something very difficult to how concentrated the acid is.

Now take ethanoic acid, also known as acetic acid, but familiar to most people as vinegar you put on your fish and chips. If we were to dissolve some ethanoic acid in water, only a small amount of it would dissociate in water. This makes it a weak acid.

As a final point, the concentration of an acid depends on the number of hydrogen ions present in a certain volume of water. So a weak acid can be more concentrated than a strong acid.

So we have established what an acid is, but how do they relate to salts? A salt is a chemical compound made from a combination of a cation (a positively charged particles or group of particles) and an anion (the negatively charged equivalent). The table salt you use to season food is a compound called sodium chloride, made from sodium cations and chloride anions. There are many ways to make a salt, but two of the most common is the reaction of an acid with a base e.g. sodium hydroxide and hydrochloric acid to produce sodium chloride, and the reaction of a metal with an acid e.g. magnesium and hydrochloric acid to produce magnesium chloride.

The chemistry and description of salts are much more detailed than what we have just listed, but for our purpose we have seen that metals and acids product salts. So what about sodium hypochlorite?

The structure of sodium hypochlorite is shown below and is a rather simple molecule consisting of only three atoms. We have already said that sodium hypochlorite is a salt, and that salts are composed of cations and anions so how does this apply here? Well, our cation is the sodium and the anion is the ClO – a chlorine atom bonded to an oxygen atom.

As a solution, sodium hypochlorite has a pale green/yellow color and has the characteristic bleach smell. It is possible to produce the solid version of sodium hypochlorite as white crystals; however a completely dry, solid form (known as the anhydrous form) is very unstable and can explode from a small amount of heat. A solid version of this molecule can be obtained, although it contains molecules of water within its structure (known as the a hydrated form). Like the solution, this solid hydrate is green/yellow in colour, and whilst not explosive, it will melt at room temperature so must be kept refrigerated.

We’re not making this up

Sodium hypochlorite can be made by reacting chlorine gas with a sodium hydroxide (NaOH).

In fact sodium hypochlorite will actually produce alkali solutions the opposite to acidic solutions. However, bleach works because of two main reasons: the oxidizing ability of the hypochlorite ion, and the products that form when it decomposes.

Bleach will still contain some hypochloric acid (remember it is a weak acid so doesn’t completely break up to produce hydrogen ions). This acid is very reactive, and will attack many types of molecules. This includes molecules vital for bacteria and microbes and is why bleach is such a useful disinfectant. The acid will also react with molecules that give clothes and other surfaces their colour. This is why bleaches will often remove the color from things. In fact, the word “bleaching” can mean to discolor or whiten.

The hypochlorite ion itself, ClO–, can also decompose to form Cl2 gas and oxygen. Both of these molecules are also rather reactive and can be involved in attacking dyes molecules.

It’s got a long bleach… I mean reach

Sodium hypochlorite has other uses aside from bleach, although many of them still involve disinfection. It is occasionally used to disinfectant swimming pools and water. However, sodium hypochlorite is used to treat waste water containing the cyanide molecule, a very poisonous and toxic chemical.

Because of its disinfectant property, sodium hypochlorite is often used in dentistry. More specifically, it is used during root canal treatment to help kill microbes and dissolve any remaining pulp.

Sodium hypochlorite should be used with care, especially in the form of bleach. We have already heard that in its dry, solid form, this molecule can be explosive and easily set off.

As a solution, sodium hypochlorite, in the form of bleach, is highly corrosive and can burn your skin. If this wasn’t bad enough, household bleach also includes sodium hydroxide which itself will also burn skin on contact.

On its own bleach is bad, but you should never use or mix it with other types of cleaning products. The sodium hypochlorite can react to produce chlorine gas (Cl2), a very nasty and toxic chemical to be near.  Bleach can also react with other things to make a range of volatile compounds containing chlorine, which are not only toxic but may also cause cancer.

So there we go, acids and salts are much, much more than just vinegar and seasoning. Acids play a vital role in our lives, our biology is dependent upon a selection of small molecules called amino acids. In factories and households, acids and salts are constantly being produced and used. These uses range from cleaning, to shining and disinfecting.

However, its ability to clean, disinfect and remove the colour from fabrics has seen it used for hundred of years. For such a small and simple molecule, sodium hypochlorite certainly packs a punch and just goes to show that in chemistry small things certainly should not be underestimated! Maybe we were wrong at the start to say that it’s as simple as a trip to the beach – maybe life’s a bleach after all!

[1] Much like acids, bases and alkalis have several definitions. The Arrhenius definition for bases is a substance that produces OH– ions in solution. In Bronsted-Lowry theory a base is a substance than can accept a hydrogen ion. An alkali is usually defined as a base that is soluble (dissolves in water). BACK TO POST

[2] A hydrogen ion, is an atom of hydrogen that has lost its one and only proton. This gives it a positive charge. In reality, hydrogen ions do not exist on their own in solution and readily react with water to produce H3O+ ions. But for our explanations we don’t need to worry about this. BACK TO POST

[3] There is another theory of acids and bases that was devised by Gilbert N. Lewis. This theory, however, focuses specifically on pairs of electron and whether a substance donates or receives them. BACK TO POST