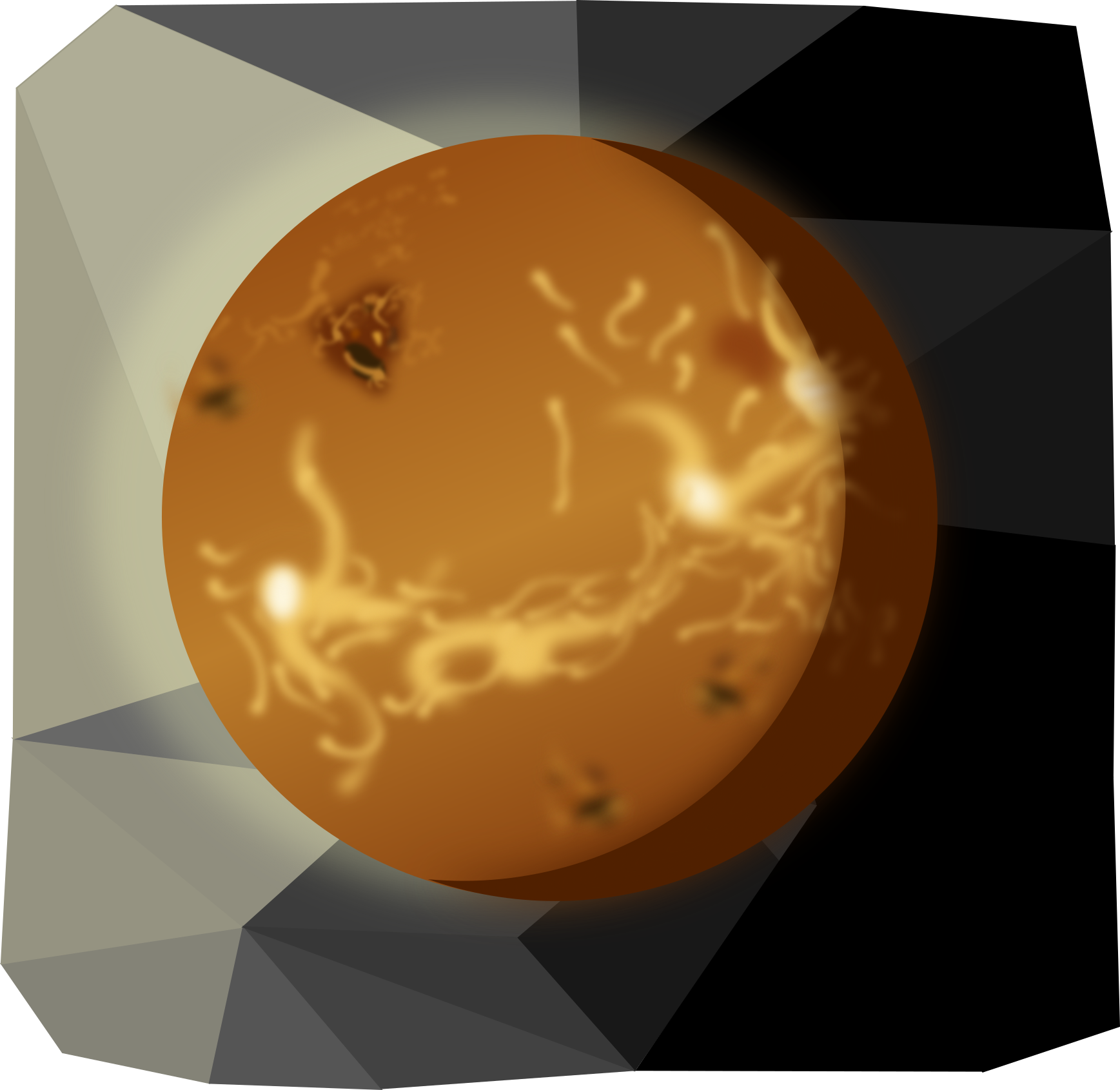 Phosphine has been found in the atmosphere of Venus – and that might mean that there is life in the swirling clouds of the hottest planet in our solar system. This month we’re looking at what phosphine is, why finding it might be a sign of life and what we think life on Venus might actually look like! Buckle up, we’re going on a journey towards the sun!

Believe it or not, the planet closest to the Sun, Mercury, actually isn’t the hottest planet. While the surface of Mercury facing the Sun is crazy hot (at 427 °C it’s about double the temperature your oven will get up to*) the surface left in the dark pointing out into space is actually −180 °C [1].

This is so cold that it’s hard to put it into context. The air we breathe contains oxygen as a gas on Earth. On the night time side of Mercury is actually so cold that this oxygen would condense into a liquid! [2]

These wild differences in temperature happen because Mercury has no atmosphere to trap heat in or to carry warm winds around the planet and spread the warming effects of the Sun out.

Venus is a totally different story…

I bet you’ve heard of climate change. I really hope you have and you care about it! You’ll have heard that the major cause of climate change is the presence of greenhouse gases in our atmosphere. They trap heat in like the glass in a greenhouse does. If you’re unconvinced that too many greenhouse gases in the atmosphere is bad, you’ve only got to look at Venus. The venusian** atmosphere is a thick soup of gas, 96% of which is carbon dioxide. CO2 is incredibly good at making a gas blanket around a planet and so the temperatures in the clouds can peak at over 470 °C [3] – hotter than the daytime surface of Mercury!

To explain just how thick the atmosphere of Venus actually is, let’s look at pressure. The air pressure around you right now will be about 1 bar. We can barely feel that air pressure because we’ve got used to it.

If you dive down in a swimming pool you start to feel the pressure pushing into your ears, right? Swimming pools have a deep end of around 3 m. At that depth the pressure you’ll feel is around 1.3 bars, and we can already feel the difference. At 10 m, maybe under diving boards, the pressure is double that of the air in the atmosphere above you! The pressure now is 2 bar.

The deepest record for a free dive is 120 m [4] which would have subjected the diver to an incredible 13.1 bars – 13 times the pressure you’re feeling from the atmosphere right now. Much more and your lungs won’t be strong enough to expand, your rib cage too weak, and.. squish.

So back to Venus… the pressure at the surface is 95 bars! [5] This staggeringly high pressure means that at the surface we would be crushed as well as cooked by the temperature. The surface of Venus is not a hospitable place at all.

If the surface of Venus is so hot that even some metals (zinc and lead) would melt and the pressure is high enough to squash a human to death, how can we even start to believe that life might exist? It seems like the conditions are impossible to survive at the surface.

Here’s the trick – if the atmosphere is so thick it would be a lot easier to fly!

The more wind you have rushing over a wing the easier it is to get that wing off the floor. Ask anyone who has been paragliding, they’ll tell you!

So if you built a floating city and dropped it into the clouds of Venus it might well be able to float at a height where the atmosphere isn’t quite so dangerous.

There are plenty of people who have thought about Cloud Cities before. There’s Cloud City on the planet Bespin in Star Wars Episode V: The Empire Strikes Back. Or Laputa – the city in Gulliver’s Travels that floats above the ground thanks to magnets.

Incredibly, architects Buckminster-Fuller and Sadao thought they could build a giant sphere of glass – like two Eden centres stuck together. The sphere would heat up in sunlight like greenhouses and the trapped hot air would make the whole thing float. They were going to call the megastructure Cloud 9.

I’m quite glad that it didn’t get made at the scale big enough for people to live in! But a tiny molecular version of the sphere was discovered and named in Buckminster-Fuller’s honour – Buckminsterfullerene.

<<< These molecules are also called Bucky balls and have the same pattern as early leather footballs – tesselated hexagons and pentagons.

Find out more about Cloud Cities in this article, or this one, or watch this documentary.

So if life is more likely to live in the clouds of Venus than its surface – we should look there!

Telescopes pointed at Venus detected some strange patterns in light travelling through the atmosphere.

In comes astrophysicist Jane Greaves and a team of scientists. They pored over data and worked out that it must be a molecule called phosphine! What is really cool is that you can tell where the molecule is in the atmosphere – how high off the surface it is – by moving the telescope around or focusing on a different part of Venus. By doing so, the team discovered that phosphine was actually in the cooler, more temperate, hospitable region of Venus’ atmosphere. You can read the research paper all about this discovery here. [6]

But what’s so special about this molecule? Why are people excited about it?

So why is finding phosphine a sign of life on Venus?

This molecule is actually really similar to a molecule you might have heard of – and probably smelled at some point – ammonia.

Phosphine (PH3) and ammonia (NH3) are linked by more than just the three hydrogen atoms. Thanks to the genius layout of the periodic table, we know that phosphorus will be really similar to nitrogen because they are in the same column – or group. In fact, phosphorus is immediately below nitrogen in the table, so it is likely to be the closest match in terms of how the molecules behave chemically.

What’s the big deal if phosphine is similar to ammonia? What makes phosphine on Venus a sign of life?

Every living thing we know of relies on one particular type of chemistry – building up amino acids. Protein is a massive long chain of amino acids all linked up. Noticing the similar name? Amino – ammonia? An amino acid is a molecule that contains some carbon atoms from a carboxylic acid attached to a nitrogen (usually with two hydrogen atoms – this is called a primary amine).

The really clever bit there is that it is fairly easy for the carboxylic acid from one amino acid to react with the amine group in the other amino acid to make a chain of two amino acids. But the ends of this chain will always be a carboxylic acid on one end and an amine on the other! The chain can keep on growing. The shapes of these molecules and the atoms you find along the chain can lead to some interesting things happening…

If you were to make trillions of billions of millions of these chains over billions of years you might make one that had just the right shape and atoms in a particular space to make another reaction happen more easily – like giving a friend a hand. Perhaps they encourage two other molecules to join up. The really interesting part is what happens if one chain happens to encourage lots of other reactions to occur and create a brand new copy of that chain. The chain has just replicated itself.

Life, in its simplest description, is simply encouraging one chemical reaction to keep happening over any others. While we are alive we are respiring (combining oxygen with a fuel – glucose – to release energy and do stuff) instead of decomposing (all of your carefully constructed and curated protein chains start to break apart).

These crude amino acid chains might be described (loosely!) as a sign of life. A collection of molecules replicating. Since the amine group is crucial to these chains, and therefore what we think of as ‘life’ – ammonia or something similar is likely to be central to that chemistry. Likewise, once the ‘organisms’ die and start to break down and the amino acid chains decompose – ammonia will be released back out as a gas.

Okay but just because the molecule exists doesn’t mean it’s being used in a self-replicating, nearly-living organism right? We’ve found phosphine and we are saying it is a sign of life. But science is about starting with the most obvious and boring explanation and ruling it out until we find the truth. It can be disappointing at times!

What makes this discovery important and surprising is that phosphine would normally react with oxygen and form an oxidised version – phosphate – in the conditions of the Venusian atmosphere. The scientists tried to explain why they could detect phosphine in every way they could before realising that normal chemistry and the conditions we know about on Venus wouldn’t explain why the phosphine molecules are there. The explanation that is left? A living organism is producing the phosphine.

Finding phosphine is a possible sign of life on Venus. But does discovering phosphine in the Venusian atmosphere mean that these cloud cities exist?

That would be an enormous leap to make. Remember that with science we start with the most boring explanation possible and work from there. What it could mean is floating tiny organisms similar to bacteria or viruses we get on Earth. It could be even more simple than that though – we may not even recognise the actor that is creating phosphine as alive – it might be that primitive.

Can’t we just send a rocket to find out?

We’ve tried. It’s tough. Russian missions called Vega did reach Venus and send balloons into the atmosphere [7] but the atmosphere is so hot and also acidic that it’s incredibly tough to build a craft that is strong enough to survive long enough to send any pictures or data back. That isn’t to say it’s impossible –  there are plans to send missions to Venus – so keep your eyes peeled! They will be looking for phosphine and signs of life on Venus.

What they really need is lots more scientists and engineers to study hard and end up building the rockets, rovers, balloons, satellites or cloud cities needed to explore Venus.

Could it be you?

Phil has a Ph.D. in chemistry but now works in an engineering department as a full-time tinkerer – taking STEM out of the lab or workshop and into classrooms.

*In degrees, anyway. It’s actually more scientifically accurate to use the Kelvin scale which would put normal room temperature at 298 K instead of 25 °C. A really hot oven at 220 °C would be 493 K, and the daytime surface of Mercury would be 700 K – so not quite double in a scientific sense. BACK TO POST