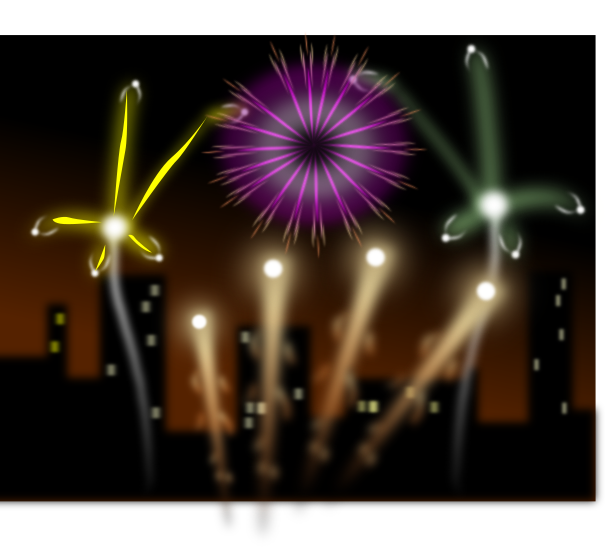 November’s Molecule of the Month

Brightly coloured explosions fill the sky and smell of bonfires and smoke tinge the air every November in the UK. But we’re chemists aren’t we? So we have to ask what does make things go boom?

Head outside, look up and you might see many things in the sky. You’ll see clouds on a rainy day but wait until night and a black background is dusted with sparkling dots of stars.  You may see birds flying, aeroplanes soaring or possibly a hot air balloon bobbing. You can’t see the air around us. It’s mostly of nitrogen gas, followed by oxygen, argon and small amounts of carbon dioxide, helium, methane and others.

As a gas, nitrogen (N2) is unreactive, which is for the best, as having a reactive gas making up most of the air around us is not a good idea!

So what does makes things go boom?

When combined with two atoms of oxygen, nitrogen can form molecules that take on a much more explosive character… literally! Many explosives contain the nitro group. The famous TNT contains three of them, a similar molecule called HNB has six and octanitrocubane, a cube shaped molecule, contains 8. Unlike its explosive cousin, the nitrate group (NO3) is more chilled out and is much more useful than for blowing things up! Although, that doesn’t stop it from being involved in explosives!

Why is November the time for a boom?

November 5th is known in the UK as bonfire night, celebrated with lighting bonfires and setting off of fireworks. The origin dates back to 1605, when thirteen conspirators decided to blow up the Houses of Parliament while the King was visiting. We won’t get involved in the reasons why they wanted to do this, but the group’s plan was simple. Smuggle and hide lots (and LOTS!) of barrels of gunpowder underneath the building.

At the right time, one of the plotters – Guy Fawkes – was in charge of lighting the fuse and creating an enormous explosion. Luckily, the plot was foiled and Guy Fawkes was arrested before he could carry out his task. But why the history lesson? Well, our molecule of the month, potassium nitrate, is a vital component in both fireworks and in the gunpowder Guy Fawkes was hoping to ignite. Although this molecule finds many uses in explosive materials, it is definitely not its only use!

Enough history – back to the chemistry of a boom!

The structure of potassium nitrate is shown below. Unlike the molecules seen so far, this one looks a little different. To start with, the molecule has no bond between the potassium atom and the rest of the molecule. Even stranger, the potassium has a positive symbol on it, and the nitrate group is drawn with both positive and negative symbols. What does this mean? The vast majority of chemistry, is all about electrons, tiny negatively charged particles “flying” around the nucleus of atoms.

In potassium nitrate, the potassium atom gives up one of its electrons and passes it over to the nitrate group. Since the potassium has had something negative removed, it gains a positive charge. For example, if you take away the minus symbol from a number (-3), you are left with the positive version of that number (+3). On the other hand, the nitrate group contains two atoms with a negative charge and one atom with a negative, so overall it is negative.

You can think of this as you and a friend both trying to fill a sticker book. The sticker books are identical and both need exactly eight stickers to complete. You have nine stickers, one too many, and so need to get rid of one to complete your collection. Your friend, however, only has seven stickers and is desperate to find one more to complete his collection. The ideal solution is for you to give one of your stickers to your friend. You both now have exactly eight stickers, can complete your collections and are feeling much happier! This is similar, albeit in a very simple way, to the situation with potassium nitrate. Here, we call potassium nitrate an ionic compound. The positive potassium is known as a cation (said like cat-iron) and the nitrate group as an anion (said an-iron).

How long have we been making things explode?

Potassium nitrate appears a white solid powder and will dissolve slightly in water. This molecule has been known since ancient times, where it was known by the Ancient Greeks and Romans as saltpetre. It was the Chinese who realised that mixing saltpetre with charcoal (a pure form of carbon – think soot) and sulfur made an explosive powder that could make things go boom! From then on, the use of potassium nitrate was forever linked to a powder with an explosive attitude.

From the middle ages, saltpetre has been commonly used to preserve food, particularly meats, so that it can be stored for longer without going rotten. When added to meat, the nitrate part changes to another form called nitrite (NO2–). This molecule helps prevent the growth of bacteria that spoil food, and also causes bacon to appear pink in colour!

Most of the potassium nitrate in use is produced through man-made processes. However, it can be found in nature. Crusty formations can sometimes be found in caves, where over time mixtures of bird and bat poo (known as guano) combine with the minerals in the cave walls to form potassium nitrate.

However, whilst potassium nitrate may naturally form from bird and bat poo, a common method for making this molecule used any kind of waste that was available. Animal or human!

Over the centuries, various ways to create potassium nitrate from waste have been created. During the American Civil war in the 1860s, a man named LeConte described two methods for making potassium nitrate (you can read the original text here). These two methods were given the very boring name of The French method and the Swiss method. In the French method, manure was mixed with ashes, straw and a large helping of urine. This mixture was then left from months or years, with regular top ups of urine, before being filtered through more ash and straw. From this disgusting mixture can be extracted crystals of potassium nitrate and from there you could make something go boom. We strongly advise checking with whoever owns your house, before trying to make this on your dining room carpet!

So what role does potassium nitrate play in gunpowder?  To understand this, we need to quickly look at how gunpowder works and all the different bits it contains. Fireworks, gunpowder, pretty much any type of explosive, usually require three main parts: fuel, an oxidiser and some source of ignition. Potassium nitrate is the oxidiser, which simply means it is used to produce oxygen. (The similarity between the words oxidiser and oxygen is because they are related, but it is not the whole story!) Oxygen is essential to allow a fuel (or nearly anything) to burn [1]. When gunpowder is first ignited, our potassium nitrate breaks apart to form potassium nitrite (the same molecule used to preserve meat) and oxygen. This oxygen then allows the fuel to continue burning, providing the big boom!

War.. what else is it good for?

Away from death and destruction, potassium nitrate can also important for life and growth. This molecule is also used as a fertiliser, and a very good one given it contains two elements that plants love: nitrogen and potassium.

Though potassium nitrate has, for centuries, injured and killed, it has found uses to benefit and heal people. Many toothpastes designed to help people with sensitive teeth contain potassium nitrate. Here, the molecule is believed to block the nerve’s signals to the brain about sore or aching teeth. Historically, this molecule was used to help prevent asthma. Paper was soaked in a solution potassium nitrate and allowed to dry in a jar. The paper was ignited and the fumes inhaled by the patient. By setting fire to the paper, a variety of nitrogen and oxygen compounds were produced, including NO2 (more famously known as laughing gas), which helped to relax the muscles and stop the asthma attack.

The beauty of chemistry, and science in general, is how it links seemingly unconnected things. Bacon, poo and fireworks might all form part of your 5th of November, but you are very unlikely to believe them to have the same molecule in common, and yet from start to finish we can trace the life of potassium nitrate. Its formation from manure, to its use in preserving bacon, or helping plants to grow, before finally providing the oxygen essential for the gunpowder in a firework to burn. However, our molecule does still have one final appearance, and those of us brushing our teeth with sensitive toothpaste, will encounter this ancient, many named molecule one final time! Now that we know what makes things explode – go out and enjoy a fireworks display – and for once on this website we will say hopefully something DOES go boom!

[1] For something to burn or to give if its proper name combust, an oxidiser is needed. Whilst the most common oxidiser is indeed oxygen, there are other types of oxidiser that can allow things to burn. BACK TO POST