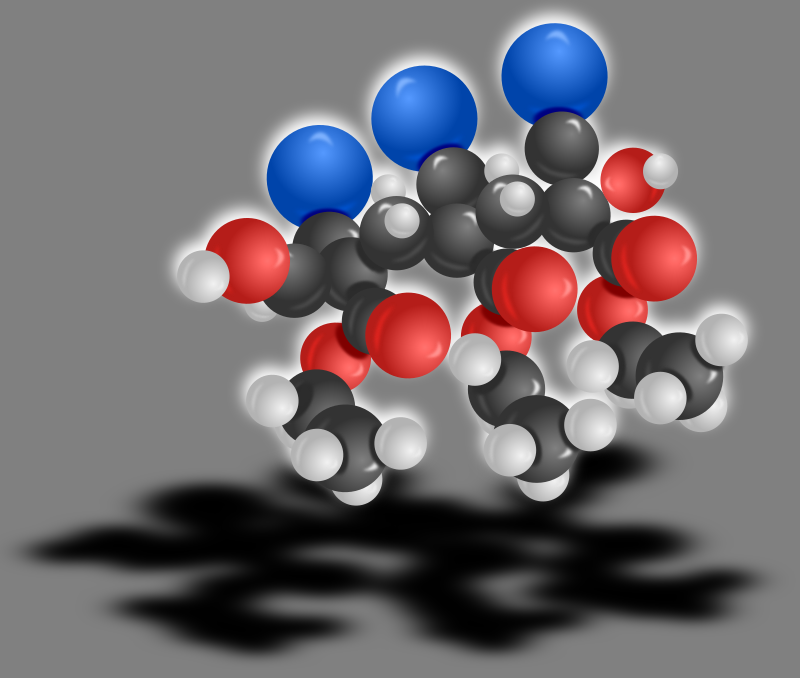 There was once a time when we were not all glued to our tablets, smart phones, games consoles or laptops. Yes, such a time did exist (and not as far back as you might think). Next time you’re in a sticky situation where you have been told to put down the digital and go and learn something, this is for you, the chemistry of the stickiest thing we could think of – super glue!

Even though TVs and games consoles were still popular, many children (and their eager or exasperated parents) spent their time making and creating all types of designs. Shows such as ArtAttack, Smart and Blue Peter, as well as various books, captured children’s imagination and encouraged them to delve into the art of…well…art!

Paint, papier mache, cardboard kitchen or toilet rolls, paper, card, pipe cleaners, and sticky-back plastic were just some of the many materials needed to create masterpieces.  However, often holding these all together was glue, the classic being PVA (polyvinyl acetate) glue. It’s safe and easy to use, and there’s nothing better than picking the dried glue off your fingers.

We can upgrade PVA glue to the adult version by adding a cyano group. This is a carbon atom attached super strongly to a nitrogen atom. Adding this to vinyl acetate (the VA in PVA) and rearranging produces a group known as cyanoacrylates.

The cyanoacrylates are well known for their very sticky property and this month we will focus on the chemistry of one specific molecule in this family, ethyl cyanoacrylate (ECA) – more famously known as super glue.

Where did super glue come from?

Cyanoacrylates were first invented during the Second World War by Dr Harry Coover whilst working for Kodak. In 1942, Dr Coover was using cyanoacrylates to develop plastic sights (to improve aim) for guns. He became increasingly annoyed as the new substance kept sticking to everything! Eventually the project was abandoned, but the interest in cyanoacrylates remained. A couple of years later ethyl cyanoacrylate (ECA) was produced. This molecule was so good at sticking things together, it wasn’t long before it was sold as a strong adhesive. Super glue had entered the world!

The chemical structure ECA is shown in the image below. This molecule is packed full of interesting connections between atoms. We can see it contains two oxygen atoms. One oxygen is double bonded to a carbon atom. The other is attached to the same carbon atom by a single bond. This second oxygen is however then connected to another carbon atom.

Super glue – get stuck into the chemistry

This collection and arrangement of atoms are known as an ester. Esters are very fragrant molecules and often used to give foods, drinks and perfumes certain aromas. There’s a whole load of chemistry going on in super glue.

ECA also contains an unusual connection – the triple bond. It’s one we have not seen before, a nitrogen atom connected to a carbon atom by 3 bonds! It is these two atoms and their connection that give us the cyano part of ECA. The cyano group, CN- can be extremely dangerous when combined with elements such as sodium or potassium. When bonded to hydrogen, the molecule hydrogen cyanide is formed, which is infamous as a poison.

The final group of interest in ECA is perhaps the most important for its use as super glue, the carbon-carbon double bond, C=C. This bond allows a continuous chemical reaction can occur giving ECA that super sticky property suitable for a super glue.

But makes super glue glue superbly? How come it remains a liquid in its container, but rapidly stick things together as soon as it’s out the tube?

Molecules of ECA can undergo a process known as polymerisation to produce a polymer, but what’s a polymer? Polymers are very long chains of molecules made from a repeating pattern of one molecule. All plastics are polymers and sometimes people use polymers and plastics to mean the same thing. This is not however correct, as there are a range of natural, biological polymers. Proteins, DNA, cellulose (found in plants and paper), rubber and wool are all polymers.

The amazing thing about polymerisation and the resulting polymers are the properties they acquire. Some are super tough, others are waterproof, and some are both super tough and waterproof. They can be made to be flexible or strong, or soft but durable. The same applies to ECA, which transforms from a jelly-like, colourless liquid to a white solid substance, strong enough to stick and bind two surfaces together.

The chemistry – how does super glue work?

So how does the reaction occur? The next section gets a little complicated so feel free to skip ahead, or like most scientists do, look at the image first and then only read the text if you’re interested or need to know more detail!

Initiation – starting the whole thing off

All that is needed to start the reaction is moisture, from water in the air or from a damp surface. The chemistry going on in super glue looks complicated and has amazing results but its actually fairly simple! The water molecule, or more specifically a negatively charged OH– ion[1] from the water, can attack for carbon double bond on the ECA (remember how important we said this group was?). Dropping the fancy chemistry jargon, there are loads of individual bits in super glue but once the water in the air gets to them they all join up and stick to each other forming one solid, sticky mass!

This converts the carbon double bond into a single bond, and also makes the carbon atom negatively charged. Like the water molecule did before, this molecule of ECA (with a negatively charged carbon) can now attack a different molecule of ECA in the same way. This different molecule of ECA can then go on and attack another molecule of ECA, and so on. The technical term for this is propagation. This repetitive reaction takes a load of single ECA molecules and converts them into one long chain. By doing this, the substance changes from a liquid to a solid, and also binds two surfaces e.g. wood and metal, plastic and plastic, and skin and wood (if you’re unlucky) together.

Termination – how does it stop?

The reaction is terminated by either another molecule of water, or by running out of ECA molecules to react with.

There are actually some ways to speed up how fast super glue sets by playing with the chemistry a bit. Adam Savage (from Mythbusters) is actually a massive fan of super glue and can make anything with it!

Asking for a friend… what if you glued something together by accident?

We mentioned earlier how fun pulling PVA glue off your fingers and hands was, but what happens if you’re unfortunate enough to get something superglued to yourself. How can you undo something that you have already superglued together?

One option is increasing the temperature to above 150oC at which point superglue decomposes and essentially falls apart. However, heating your skin or certain materials to these temperatures is not a good idea and is likely to cause damage, even if it does undo the glue. A better option is to use a small amount of acetone or nail polish. This will react with the superglue and cause it to break apart.

Pushing the chemistry of super glue – what else can it do?

We have already seen how the main use of ECA is in super glue and other adhesives. Away from DIY and building models, ECA has been used medically as liquid bandages to help literally glue wounds together. In practice though, other cyanoacrylates are actually preferred and used more commonly. Recent research has looked into the possibility of using ECA nanoparticles[2] to help deliver painkillers into our bodies.

However, using super glue from your local hardware store to treat wounds is not a good idea, especially as they may contain toxic solvents or other impurities that will cause more damage than help.

Don’t get any ideas – super glue is still really dangerous

This leads nicely to an interesting point. How toxic is ECA? We have already established that molecules of ECA contain a cyano group, which can form extremely poisonous compounds. However, when attached an organic molecule – basically a chain of carbon atoms, its toxicity is greatly reduced. Nevertheless, ECA is toxic and should be treated with respect. This is a good general rule for chemistry, not just super glue, treat things as if they are poisonous and don’t get them on your skin!

Small amounts on the skin does not usually cause any problems, but skin irritation can occur, especially in large amounts or if there is contact over a long time. Inhaling ECA fumes can produce flu-like symptoms and trigger asthma attacks.

As wonderful as super glue is for most materials, keep it away from anything cotton! The reaction between ECA and cotton produces a lot of heat, very quickly (the fancy name for this is exothermic). In fact, so much heat is produced that the cotton can set on fire and cause burns. That sounds a bit more like traditional chemistry – setting things on fire with super glue.

Thanks for sticking with us!

Despite the increase in ownership of electronic gadgets, many kids and adults still enjoy building and fixing all kinds of models, crafts and fixtures. For safe and simple jobs, PVA glue is fantastic, great for all ages and easy to remove. However, when a stronger glue is called for we turn to the cyanoacrylates, and ethyl cyanoacrylate – sold commercially as superglue. This substance may initially seem weak and unsuitable for the job, a colourless gel-like liquid that’s easy to spread and pull apart. However, within minutes and a little help from some mositure, a rapid reaction occurs, transforming our individual molecules of ECA into a long, chain of connected ECA molecules. This polymer is now white, solid and best of all strongly binds two surfaces together.

Super glue is great and its use in medicine shows it to be so much more than just a super tool for DIY. Just keep it away from your favourite cotton jumper and sheep…

[1] Whilst the majority of molecules in a glass of pure water are H2O, a small amount can react together to form positively charged H3O+ ions (this is essentially what makes acids, acids) and negatively charged OH- ions. BACK TO POST

[2] Nanoparticles are incredibly small structures (nano refers to something that is a billion times smaller than a meter) formed from a few tens, to a thousand molecules. They can come in all shapes and sizes and have fantastic properties that make them exciting to study and use. Sun-creams for example will contain nanoparticles that help to increase protection from harmful UV rays, but also make the sun-cream transparent so you don’t look a white, gloppy mess whenever you put some on BACK TO POST