Set Fire to the Christmas Pudding 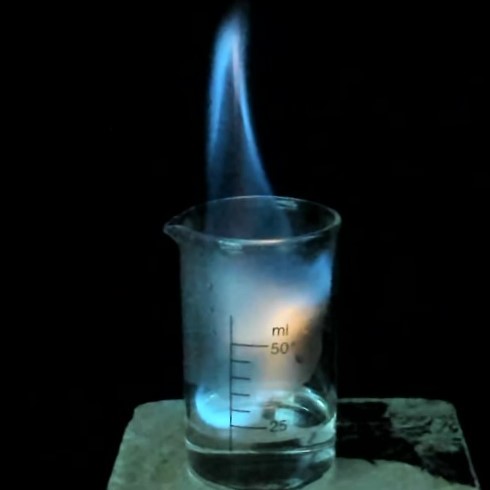 It’s a tradition we all love. You take a pudding that contains brandy. You serve it with brandy butter, brandy sauce and brandy cream. And to top it all off it arrives at your table covered with brandy and then set on fire! Why don’t we just cut out the middle man and have a glass of brandy? Well, it’s all part of the Christmas theatre isn’t it. Let’s have a look at how we set fire to the Christmas pudding and see what’s going on.

Remember to stay safe whenever there is fire, or the potential for fire. I’ve put some safety advice at the bottom of this page.

Pure alcohol? Yes, no question. We even mentioned ethanol’s combustion in an earlier Boom Advent all about combustion.

But drinks like brandy – or in this case rum – are only 40% alcohol. The rest is flavouring and water and they don’t burn.

What definitely does burn is alcohol vapour.

How do we get alcohol vapour?

When we warm alcohol up, some of the alcohol molecules that are mixed in with the water in the drink start to leave as a gas. The air around your container of liquid alcohol starts to get filled with flammable molecules. This vapour can definitely burn!

The reason for the vapour burning where the liquid doesn’t is how much oxygen can get around one of the flammable alcohol molecules at any time. In the liquid, only the surface is exposed to oxygen and even then, half of that surface is water since it’s only 40% alcohol to start with.

Water vapour doesn’t really start to come out of the liquid until it is really hot – watch your kettle for an example of this. But the alcohol is more volatile than the water so the vapour starts to come out at much lower temperatures.

Are you sure it’s just the vapour that burns?

Yes – if we seal a bottle with a tiny bit of liquid at the bottom and then shake it up we can encourage some of that vapour to build up in the bottle. When we take the cork off and bring a match to the opening…

The liquid at the bottom doesn’t light – only the vapour burns.

Let’s see that in slow motion…

In open containers, cold alcohol (it was about 18 °C in the room) up to 90% pure alcohol won’t catch fire when a match is brought to the surface for a short amount of time.

You need to keep the match there for a while for the alcohol to start to warm up and then the vapour is released – then you’ve got a fire!

So how do we set the christmas pudding on fire?

We’ll need an alcoholic drink that is 40% alcohol by volume and a safe way to warm the alcoholic drink up slightly (saucepan). Then we know we’ll have lots of alcohol vapour to light. Now you know how to set fire to the Christmas pudding!

It’s really important to remember the consequences if this were to go wrong. You have a flammable liquid, a source of ignition, and plenty of lovely stuff in your home that could also catch fire. There are some things that you really must do before you try any of these experiments. We’ll start from the worst-case scenario and go from there