Get fit, get cramp, and blame lactic acid. 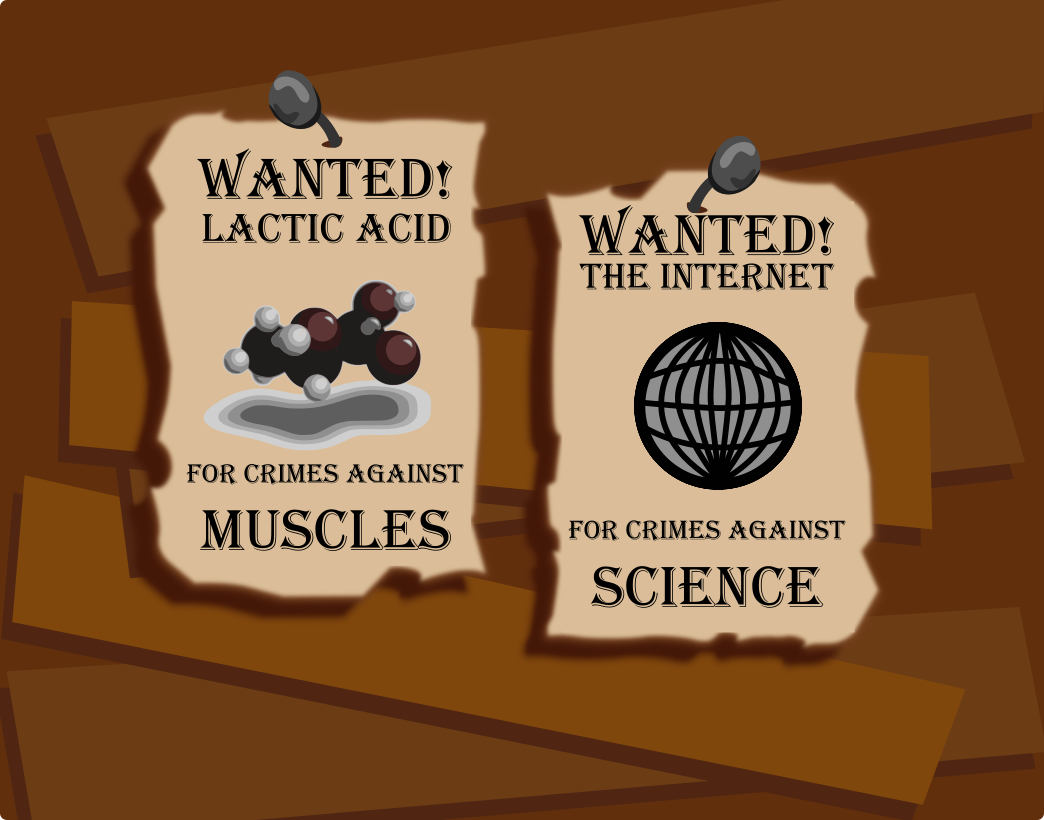 January’s Molecule of the Month

January is the month of new starts, new years and new resolutions. Following on from the Christmas holidays, feelings of guilt from eating and drinking too much lead many of us to begin (or at least promise to begin) doing more exercise. This might include walking more, going for runs or joining a sports club. For most, however, it is joining the gym, and committing to several sessions a week.. at least that’s the plan! Until the day after the gym and your dreams of getting fit turn into cramp – should you blame lactic acid?

The sudden re-introduction to exercise can be tough for many. After only a few minutes sweat is pouring off, you’re out of breath and your muscles are starting to burn and ache. It is our desperate need for continuous energy that results in the production of January’s molecule of the month – lactic acid.

What is lactic acid?

As the name suggests, lactic acid is an acid, and whilst it may not be as strong as the acids you will find in a lab, such as sulphuric acid or hydrochloric acid, it is stronger than vinegar. Despite being commonly known as lactic acid, its technical chemical name is 2-hydroxypropanoic acid and has the chemical formula C3H6O3. The structure of this molecule is shown in the image below.

As a solid, lactic acid is a boring white powder. Its high solubility in water (and low melting point) means it is often found as a boring colourless solution. This molecule is also a chiral molecule, which if you remember from August’s molecule of the month, means it exists in two forms that are mirror images of each other. We call these forms enantiomers. So we know which forms we are talking about, chemists describe these enantiomers as L-lactic acid or D-lactic acid. In animals, the L- form is more common.

What does lactic acid do?

So what role does lactic acid play in our bodies during exercise? Normally when we exercise – or do anything really – our body uses oxygen to help in the process of breaking down glucose (obtained from food) to produce CO2, water and, most importantly, energy. The presence of oxygen means this process is described as aerobic.

During intense exercise, our bodies require energy faster than it can provide oxygen. Chemical reactions are forced to occur without there being any oxygen present, a process known as anaerobic respiration. Here, glucose is converted firstly to a molecule called pyruvate and then into lactic acid, or to be a bit more precise, lactate[1].

We should point out that lactate is actually being formed all the time. Even when we are being lazy and doing very little. However, during that time the lactate is being removed at the same rate it is being produced.

Do getting fit, making lactic acid, and feeling cramp always go together?

The problem is that to get fit you need to do lots of heavy exercise, and the lactic acid cannot be removed as quickly as it is produced and so starts to build-up in our bodies. However, current research suggests that lactic acid build-up is not actually the cause of cramp! In addition, the idea that muscle soreness in the days after exercising is caused by the build-up of lactic acid and increased acidity in muscles is also untrue. The involvement of lactic acid in muscle soreness, cramp and its general involvement in fitness and exercise is still argued over. Several experiments indicate no connection between lactic acid build-up and delayed muscle soreness. However, it is still widely talked about and reported that lactic acid is indeed the main cause of the cramps associated with exercise and getting fit.

The truth may be the opposite! While lactic acid build-up is caused by exercise, it may actually benefit us instead of making us suffer.

Lactic acid pops up whether we’re trying to get fit or not!

Away from exercise and getting fit, lactic acid also has a large effect on our teeth. We are often told that eating too much sugar is bad for our teeth. However, it is not actually the sugar itself that causes the problem. Large molecules called glycoproteins can take a sugar[2] called sucrose (a common sugar found in most foods) and break it apart into two small sugars: glucose and fructose. Bacteria in our mouths then convert this fructose into lactic acid. It is the production of lactic acid that starts to dissolve your teeth. These bacteria are always present, therefore lactic acid is always being produced, so brushing your teeth is important.

Lactic acid may sound very similar to another molecule, lactose. Their similar names are no surprise, given both are connected to milk, ‘lac’ comes from the Latin for milk. Lactic acid itself was first isolated from sour milk by a chemist called Carl Wilhelm Scheele in 1780.

The production of many dairy foods such as cheese, buttermilk, crème fraiche and yoghurt begin by fermenting milk using bacteria (for example Lactobacillus). These bacteria produce lactic acid from the sugar lactose found in milk. If you’ve ever been unfortunate enough to add something acidic to milk, then you will know what happens! A lumpy mixture of curds and whey forms!

What about your New Years Resolution then?

For those of you committing to the New Year promise of exercise – good luck! And to all those who already are active, then know that lactic acid is not the troublemaker it is often claimed to be. In fact, it is constantly being produced and its ability to be produced when our needs exceed our ability to take in energy is essential for us to push ourselves and go longer, harder and faster.

If exercise is not really your thing and your happiest with a glass of milk, a (thick) slice of cheese or a yoghurt, then you can thank the lactic acid producing bacteria that kick start the process. From what we put in our mouths, to what stays in our mouths – lactic acid can be damaging to our teeth and is why, without sounding like a nagging dentist, brushing your teeth is important.

[1] One definition of what makes soemthing an acid is its ability to lose hydrogen(s) to produce H ions. A H ion is an atom of hydrogen without its one electron. When lactic acid loses one of its hydrogens it becomes known as lactate. Losing hydrogen leaves the molecule (the conjugate base, to get technical) with a negative charge. BACK TO POST

[2] When we hear sugar most of us think of the white granular stuff we put in cakes or coffee. From a chemistry point of view, sugars are a class of molecules. Glucose, fructose and two-sugar-combinations (lactose, maltose and sucrose -the sugar we are most familiar with) are all sugars. BACK TO POST