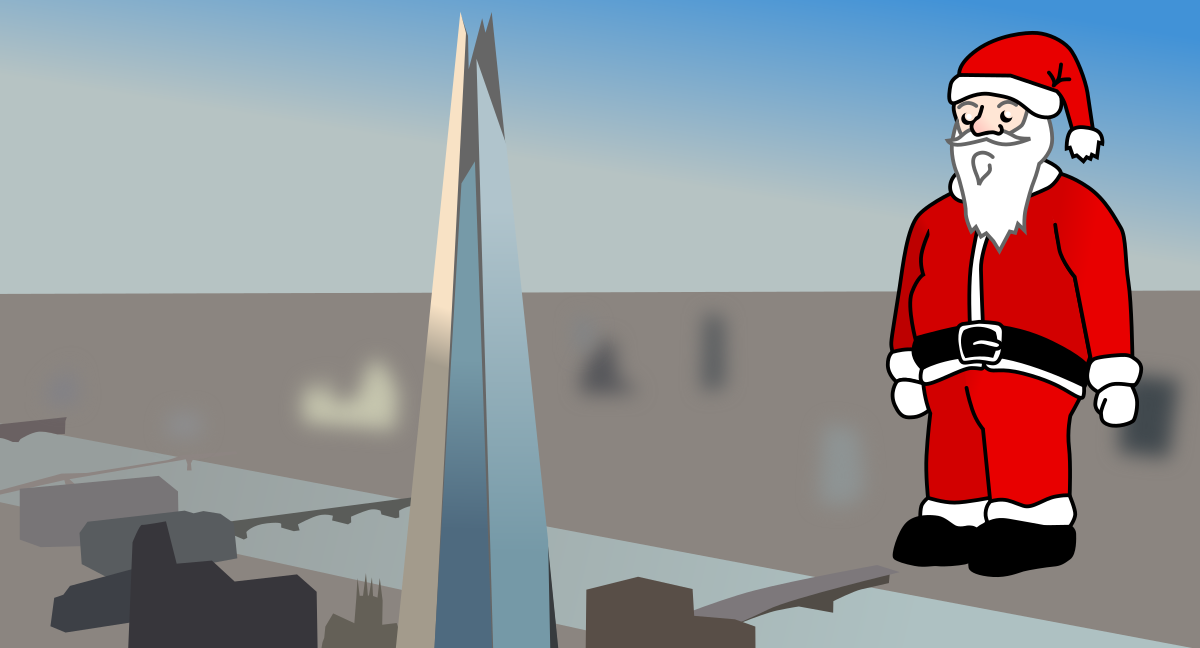 This week’s daft question is this: given that everyone leaves a mince pie and a drink out for Santa as he travels around the world, how many calories is he consuming in one night? And how many calories does he burn doing all that travelling? Let’s have a look at Santa’s diet and see.

How Many People Celebrate Christmas?

Well, Christmas is more than just a religious holiday. It’s a festival celebrated almost everywhere on Earth and, if NASA upgrade their telescopes we may find out that other planets have Christmas too. Here on Earth though, the populations of countries that don’t outright ban Christmas celebrations adds up to 5.39 bn people. That’s 5,390,000,000 people.

We can assume that there are 4 people in each household, as a rough estimate. That means 1.35 bn houses!

How Many Calories Are in Santa’s Snacks?

In the UK the tradition is to leave out a mince pie for Santa to munch on and a glass of milk to wash it down with. Santa’s diet isn’t very balanced, there’s far too much sugar there. Some people leave out an alcoholic drink but if we start to keep count of the number of units of alcohol Santa is knocking back at Christmas then there might be trouble!

An average mince pie comes in at 250 kcal while a glass of milk comes in at around 150 kcal.

Wow! Santa’s diet has a huge number of calories.

How Much Weight Would Santa Gain?

Roughly speaking, 500 kcal extra per day leads to 500 g of body weight added in a week. That means 500 kcal can add about 71 g of weight to you in a single day!

That number is hard to imagine so…

Roughly 7 Eiffel towers or, about 1 Shard, or 1/5 of the Empire State Building. Santa would become Godzilla sized, basically. If he isn’t already, Santa will be on a diet in January.

What About the Calories Burned?

Santa has to climb up and down each of the chimneys at every house he visits. I’m going to assume that each house is two storeys tall, since I’m based in the UK. I’m also going to assume that Santa can slide down the chimneys using no energy at all, since he’s magic. That leaves us with the climb. The average 2 storey house in the UK is 8 m tall. That means, in total, Santa has to climb up 10,800,000,000 m (that’s 10.8 million km). This would get us about 7% of the way to the Sun, if we put it in a straight line. It also means that even at light speed it would take nearly a second to travel the distance upwards that Santa has to go! But the important thing for our calculations is that going upwards on Earth takes energy.

Let’s assume that Santa weighs in at 150 kg since he’s always drawn as quite a rotund fellow. That means the amount of energy Santa needs to use to climb up each chimney is:

We can convert Joules into calories and then into the kilocalories we use for food and get:

What if Santa Shares the Food with the Reindeer?

But it isn’t just Santa delivering the presents, is it? So let’s look at the reindeer as well as Santa’s diet.

We can guess at how many calories the reindeer burn pulling the sleigh. Normal reindeer dashing about consume about 300 kcal per km they travel. We can assume that magic means that the reindeer aren’t working any harder than that on Christmas Eve!

How Far Does the Sleigh Go?

Next, we need to know how far the reindeer actually have to travel. This is where we will need to make some more assumptions. Let’s take all the houses we said could celebrate Christmas and evenly space them out around the world based on the average population density of the planet. This average tells us that for any square kilometre of Earth there are 59.6 people. That means about 15 families per square kilometre.

The next question is how many of these squares do we need for all of our 1.35 bn families to be in one? That comes in at 90.5 mn km2. If Santa travels diagonally across each one of these squares he’ll get reasonably close to each of the houses in the square. The diagonal of a square is 1.41 times longer than each side. Using that we can guess that Santa has to travel a grand total of:

That takes us 85% of the way to the Sun. Now that’s getting a bit crazy!

Adding up Santa and the Reindeer

How Many Calories Are Left?

All those treats added up made 506 bn kcal. Santa and his crew have burned 349 bn kcal. They have used up 69% of the total calories they have eaten.

Santa must have some extra help!

We’ve still got 157,000,000,000 kcal to account for, otherwise Santa will still gain enough wait to be a building. There must be someone helping Santa to eat all these tasty snacks. Maybe Santa takes some of the mince pies back for the elves in the workshop? One thing we know for sure is that the parents wouldn’t dare touch them!