Strong as an Oxalic Acid 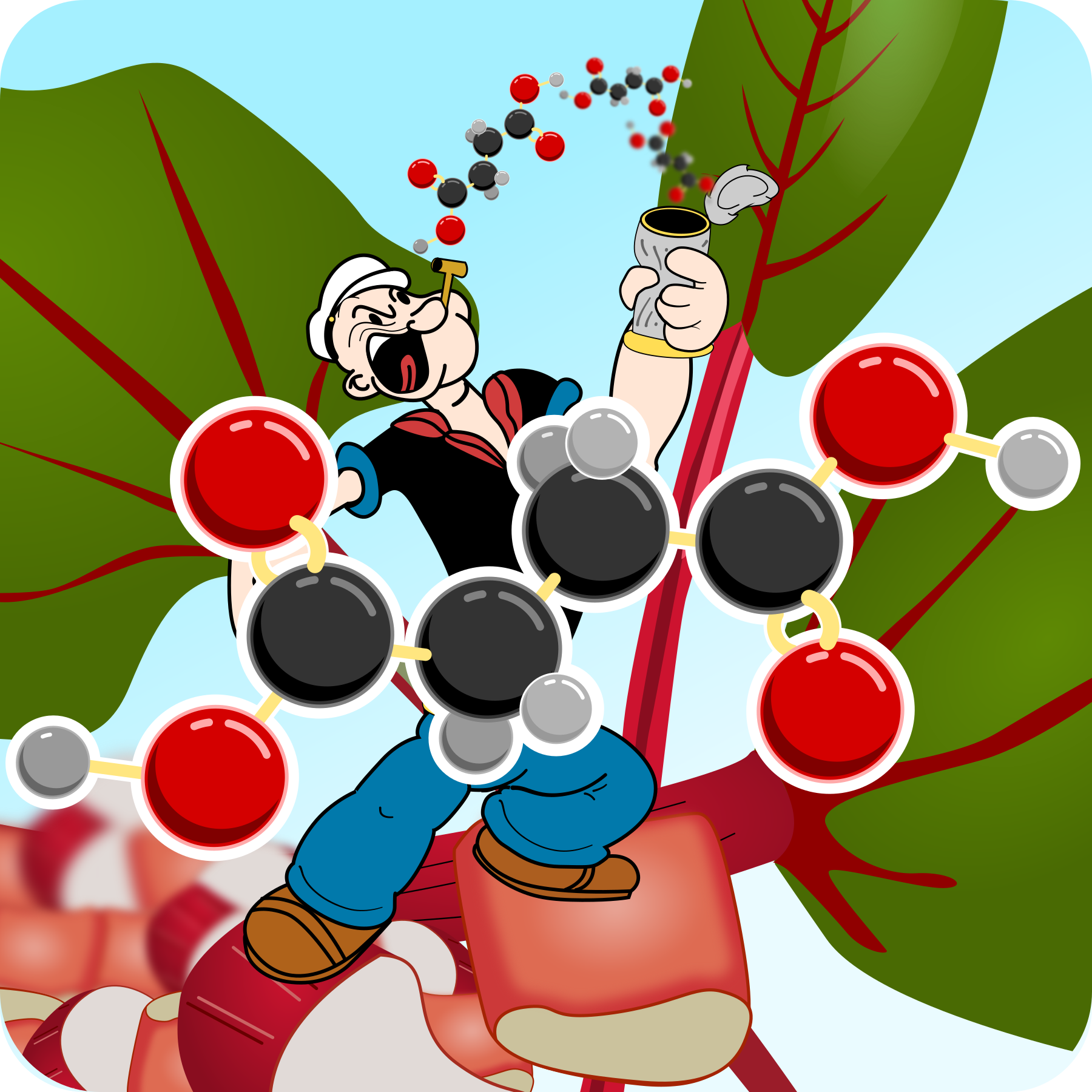 The traditional sweet shop with large glass jars filled with a selection of different chocolate, candy and hard boiled sweets are rare to find. But when you do find one, the choice is amazing. One of my favourite is the rhubarb and custard hard-boiled sweets. Each sweet combines the sweet taste of custard with the sharp, acidic string of rhubarb. Apart from these sweets, most people think of rhubarb only in terms of crumbles, fools and maybe jam. For those of you who use or grow rhubarb, you will probably be aware that only the stalk is ever used. The leaves should not been eaten. Why? This is because rhubarb contains a fair amount of this month’s molecule – oxalic acid.

This is a video version of the article you can watch instead. If you enjoy the video, let us know in the comments!

Oxalic acid is a very simple and symmetric molecule.

We’ve mentioned loads of acids over the Molecule of the Month posts. Do you remember isovaleric acid that makes cheese tangy and socks smelly? How about launching rockets with vinegar and baking soda? Or lactic acid and its possible role in cramp? Oxalic acid belongs to a family of acids known as carboxylic acids that includes ethanoic acid (vinegar).

All carboxylic acids contain a very specific combination of atoms, a –COOH group. Here a carbon atom has a single bond to one oxygen atom, and a double bond to the other oxygen. A hydrogen atom is then attached to the singly bonded oxygen. It is this hydrogen, which can break apart from the molecule that makes the molecule acidic.

In general, carboxylic acids are not as strong as more familiar acids like hydrochloric or sulfuric acid. However, oxalic acid is a relatively strong acid.

Oxalic acid has a melting point of 190 °C and so at room temperature is a while solid. It is also highly soluble in water and alcohol and so easily exists in solution.

The name oxalic acid comes from Oxalis, a genus of plants from where the molecule was first extracted. However, it’s more formal name is ethanedioic acid. Oxalic acid itself was first isolated towards the later part of the 1700s.

Spinach leaves can contain up to double the amount of oxalic acid found in rhubarb!

This molecule can be found in many other foods, although in lower amounts. Lettuce, broccoli, chives, radish and watercress all contain oxalic acid. However, don’t panic – this is only when eaten raw and if you were to eat everything, stem, leaf and flower.

So if oxalic is found in many foods that we eat, then it’s perfectly safe? Not quite. High levels of oxalic acid in our bodies can cause problems. Most of these problems occur in the kidneys. To understand the reason why, we need to look at some simple chemistry.

If you’re not part of the solution…

You’re part of the precipitate

When oxalic acid dissolves in water or ethanol it can lose two hydrogen atoms to form an oxalate anion. This anion can happily bond to metal ions to form a precipitate, and a solid can form. One such metal ion is calcium. When calcium ions are present, a white precipitate of calcium oxalate can form.

Will one more kilo of spinach really kill you?

The minimum amount of oxalic acid to be fatal is 0.6 g per kilogram of ‘you’. That means for the ‘average’ male you would need to eat 42 g of oxalic acid and 33 g for the ‘average’ female. That’s about 3 tablespoons for men and 2 for women – it’s a lot! Before you stop eating rhubarb altogether, note that in comparison rhubarb leaves contain 5 g per kilogram! So you would have to eat a lot of rhubarb in one sitting to have any problems – about 7 kg of just the leaves.

Spinach contains a bit more than rhubarb leaves, and a simple calculation also suggests that you would need to eat around 4.0 kg of spinach to have a lethal amount of the molecule. Even Popeye, a big fan of spinach, is unlikely to eat that much. So while spinach might make you as strong as an ox – oxalic acid won’t!

In the sweet shop of chemistry there are a selection of molecules to choose from. There are those that give taste to foods, those responsible for the smell and others that give rise to its colour. Some molecules are essential to us, while others can cause serious damage and are best to avoided. However, some, like oxalic acid, are fine in small amounts. But eat too much and your kidneys will suffer.

Oxalic acid might be most famous for being found in rhubarb, but this molecule is so much fascinating. It can remove rust, dissolve in water or alcohol, and is also a double acid! So next time you tuck into a warm rhubarb crumble remember, and beware, of oxalic acid.